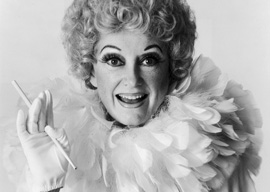 The Grim Reaper thinned the herd of baby-boomer entertainment icons this summer. Ernest Borgnine, Andy Griffith, Phyllis Diller, William Windom, and”ahem”Scott McKenzie made up a huge chunk of 1960s entertainment. The first four were mainly television standbys, and the last was a prophetic musical voice of, well, something or other.

Ernest Borgnine seemed to be immortal. Marty established his ethnic street cred and his ability to play big and ugly. Airwolf showcased his longevity. But it was McHale’s Navy that seared him into the minds of young boomers drinking at the TV font. He portrayed a wisecracking and clever naval officer who always got one over on the brass. Borgnine was himself a naval veteran of World War II. It always struck me how his generation relished making fun of the war that defined them. It is hard to imagine sitcoms based on Vietnam or Afghanistan rousing such merriment in their survivors, even if such shows could be produced.

Andy Griffith was a horse of a different color entirely. Whereas Borgnine was an edgy ethnic urban, Griffith was Southern-fried cornpone. He unleashed Mayberry, NC upon an unsuspecting populace in The Andy Griffith Show. While others were dealing with integration and Vietnam, Mayberry’s citizens and their wise-but-slow-talking sheriff ambled good-naturedly through life (though I always found Floyd the Barber scary in a pedophilic way). Apparently in real life Andy was not always so pleasant, at least according to some of his costars. He could be positively creepy, as in Pray for the Wildcats.

Despite his New York City birth, William Windom radiated a Midwestern down-to-Earth quality melded with wistful desperation. Trekkies adored him as Commodore Matt Decker of the USS Constellation in the Star Trek episode “The Doomsday Machine.” My favorite of Windom’s performances was in Night Gallery’s ”They’re Tearing Down Tim Riley’s Bar,” a poignant exercise in middle-aged madness. The episode featured two now-deceased friends of my family in supporting roles. It was Windom at his most autumnal. The World War II paratrooper’s saturnine performance is a perfect counterpart to McHale’s relentless joviality. But Windom could be quietly humorous, as he showed in his rendition of a James Thurber manquÃ© for My World and Welcome to It. He later appeared as the curmudgeonly Dr. Seth Hazlitt in Murder, She Wrote.