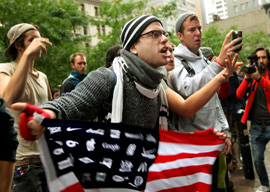 The children—dozens of them at first, then hundreds—gathered in downtown Manhattan on September 17 to change the world. For better or worse, they’re still there. They may even be multiplying.

Many of them, especially the girls, seemed too young to have so much facial hair. Many…if not most…if not all…of them who huddled together to denounce “corporate greed” seemed unemployed: Unemployed street poets, unemployed performance artists, unemployed interpretive dancers, unemployed bongo drummers, unemployed Gender Studies grads, unemployed placard-makers, unemployed graphic designers, unemployed social-media directors, and unemployed soup-makers. It was a diverse group of people who were all fully involved at being unemployed. If employed at all, it was obviously not in professions that require periodic showering and rudimentary grooming.

There were celebrity visits from washed-up screeching beluga Rosanne Barr and the perennially aggrieved Susan Sarandon with her communist breasts. Cornel West showed up and proudly displayed his woolly hair, gleaming buckteeth, and scholarly eyeglasses. Michael Moore appeared on TV and voiced his support for the protesters, saying that some people were eating more than their fair share of the pie—and if anyone should know, it’s him.

Still, it took a while for things to catch fire: For nearly two weeks as the protesting faithful patiently ran around in their underwear or sat in the lotus position gently stroking their pet rats while chanting anti-capitalist slogans, the new global revolution’s numbers barely seemed to eclipse a couple hundred.

“If forced to choose between the government and corporations, give me McDonald’s every time.”

Last Friday, the movement caught a break: A false rumor spread that mega-selling English band Radiohead would appear to play a free concert in support of the protestors, causing an influx of scruffy-headed politi-hipsters to the Wall Street area.

The chanting, marching, bongo-banging, and ritual Protesting of Everything Unfair continued on Saturday. One group stomped across the Brooklyn Bridge to Manhattan in defiance of genetically modified food, crossing paths with a group marching the opposite direction against poverty. Protesters eventually flooded the bridge, blocking traffic. Police shut down the bridge and started arresting people.

At last count, the NYPD detained over 700 mostly young protesters on the Brooklyn Bridge this Saturday. The mass arrest of politico-teenyboppers started grabbing the top headlines. The left had finally found the Angry Mob movement it had craved. Arianna “Woman of the People” Huffington power-Tweeted that the movement is a “welcome reminder that, for angry Americans, the Tea Party is not the only option.”

OK, you scraggly radical goofballs. You have your “movement” now. You have your Night of the Long Goatees. You’ve been waiting for this, right? You sat in envy of the “Arab Spring” ever since it started last winter, so now you have your “American Autumn,” at least for now. And not only in New York—you got busted protesting outside the Bank of America in Boston, you did your little dances and barked your little chants outside the Federal Reserve Building in Chicago, and you even occupied a band shell in Boise, Idaho. You’re even encouraging people to occupy “The Hood” and, shucks, the entire globe!

So what in the name of Friedrich Engels is all this about, anyway?