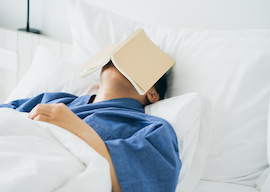 PHOENIXVILLE, Pa.—Let’s look on the bright side of the new 20-hour nonstop flight between New York and Sydney. Personally I don’t expect to ever be that desperate to get to Sydney. I’m more likely to fly to El Lay, stay a few days, continue to Maui, spend a few days watching whales, proceed to Fiji and Bora Bora to down some tropical cocktails in a grass hut, then glide into Sydney on a sunny morning just in time to meet with Rupert Murdoch before his afternoon nap.

But for those ballers who absolutely need to see Rupert within a single day so they can close that deal for the new sports network in Thailand, I offer the following advice for making 20 hours vaporize as though you were teleported through time and space in some kind of Barbarella love tube.

First of all, whatever you do, do not—I repeat, do not—turn on whatever multimedia screen is provided as part of your first-class sleeping pod. You will start watching 12 Years a Slave, even though you have no particular interest in 12 Years a Slave, because you like that two-hour, 14-minute running time. You’re thinking, “As soon as this is over, I’ll be coasting over southern Mexico”—only to find out, when it’s over, that you’re coasting over Jackson, Tennessee. Then you’ll put your noise-canceling headphones that you paid $350 for at the airport electronics store back on your head and watch Only You, the romantic drama based around in vitro fertilization, followed by the remake of Child’s Play, even though you’re still pissed that they didn’t use Brad Dourif to voice Chucky the Doll, and at the end of all that, you’re still 14 fucking hours away from Sydney only now you have a headache from watching too many tracking shots and you have a brain so scrambled that you’re gonna have nightmares about black people having test-tube babies that look like homicidal dolls. You’re ruined for the next week.

Let me list some other things you are not gonna do on your delightful journey to the land Down Under. You’re not gonna pop melatonin. You’re not gonna get a fake prescription for Xanax. You’re not gonna buy those light-emitting doohickeys that claim to combat jet lag. Unless Qantas has a fully equipped gym somewhere on the Boeing Dreamliner, so that you can run, stretch, and lift every three hours—and I’m guessing they do not—what you’re gonna do is…read a book.

“Before heading to JFK, load one of the following tomes into your Kindle.”

But not just any book. You’re gonna read one of the classics of world civilization, a long book, a difficult book, the book you told yourself you were going to read 27 years ago but never got around to it, and you’re gonna read it from beginning to end in a single flight.

Before heading to JFK, load one of the following tomes into your Kindle. Any of them will work, but some work better than others.

(1) War and Peace: This is the obvious cliché choice, the book used as a metaphor for density and length, believed to be the longest novel ever written (it’s not), and a fairly good choice for our purposes because of the war part, not the peace part. Okay, here’s the important caveat: Get the crappy Constance Garnett translation, which is sort of “Tolstoy for Dummies.” Do not accidentally download the acclaimed translation by Richard Pevear and Larissa Volokhonsky, which is full of nuance and complexity. (The reason for this will become obvious later.)

(2) Remembrance of Things Past: This might actually be the longest novel ever written, and since everyone knows who Marcel Proust is—or at least everyone at trendy cocktail parties—and yet nobody has actually read all his inner-monologue navel-dwelling drivel, you’ll be able to amaze your friends for the rest of your life with comments like “As Proust once said, ‘Happiness is beneficial for the body, but it is grief that develops the powers of the mind.’” Of course, you don’t have to get the quote exactly right because you’re the only guy who’s ever actually read the whole novel. (Best to choose a quote later than page 1250.)

(4) Spenser’s Faerie Queene: Admit it, you haven’t opened it since sophomore year when it was assigned as part of “Survey of Elizabethan Literature,” and you didn’t get even halfway through Book 2. To break it up, turn to your travel partner and bore him or her with speculation about the proper pronunciation of Archimago, Chrysogonee, Guyon, and Satyrane, as well as the scenes that George Lucas stole for Star Wars.

(5) Poor Fellow My Country: Never heard of this one? That’s because it’s Australian. 850,000 words. It’s written by a guy named Xavier Herbert, runs to just under 1,500 pages, and is full of stuff about Australian patriotism that you won’t understand at all—but hey! Your destination is Sydney! Impress the locals!

(6) Mission Earth by L. Ron Hubbard: It takes Scientologists years to finish this massive son of a bitch. By reading it on your way to Australia you can hope to someday meet Leah Remini and maybe rescue a cult victim.

(7) Winston Churchill’s four-volume History of the English-Speaking Peoples: You’ll be the first person in history to actually finish the book that’s in every home library but is frequently mistaken for a leather-bound jewelry box. If that’s too hard, try…

(8) Gibbon’s Decline and Fall of the Roman Empire: At least it has sex and violence.

(9) Stephen King’s The Stand: Make sure you get the 1990 expanded uncut version and not the original, but at only 800 pages, this is for lightweights. It’s actually a good story. When you get to the part about the state trooper named Joe Bob, turn to your travel partner and say, “Isn’t that the character that Joe Bob Briggs played in the miniseries?”

And if you can’t bring yourself to tackle any of these, just because you don’t think your brain can soldier through the density, there’s always…

(10) The Hunchback of Notre Dame: The best 940 pages ever written, especially relevant in the year of the Notre Dame fire.

Now. Here’s what will happen. Any of the above books, with the possible exceptions of the last two, will put you into a deep slumber. Have a little red wine as you read and you’re guaranteed one-hour naps throughout your journey. Whenever you wake up, read another chapter, and before that chapter is over, you will once again descend into dreamland. The combination of needing to finish the book in one sitting, therefore gaining entry into the Guinness Book of World Records, while being trapped on the plane will result in an altered zombie state that will only be broken when you are jolted out of it by the wheels of Qantas hitting the tarmac at Kingsford Smith Airport.

You have survived and you have filled yourself with fascinating trivia that will last a lifetime. Congratulations. You have conquered time and space.

But your butt will still hurt.