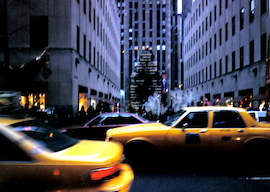 NEW YORK—The master of the love letter to New York, E.B. White, eloquently described the city as a place that “can offer the gift of loneliness and the gift of privacy.” Like many of us he believed the place would last and would always matter. White was an optimist, sophisticated and thoroughly American. He was lucky to die in 1985. I say lucky because fate spared him from seeing the wreckage of what was once his dream city. It was also my dream place, an indelible part of my youth, a poem of steel and limestone majesty, of high-end shops, hotels, theaters, and nightclubs, of dandies and high-class women, of hustlers and gents, of tall, blond Irish cops, gangsters in fedoras, and kids playing stickball in empty Bronx streets.

Walking down Park Avenue this week, I had problems spotting the tip of the Chrysler Building’s spire. Ugly glass behemoths were in the way. Tall, slender, and glassy is the choice du jour in buildings; short, squat, fat, and ugly is le gout du jour in humans. Never have I seen a people more “replaced” than what used to pass for New Yorkers in my day. There are no more Winston Guests, not to mention Vanderbilts, Whitneys, or Rockefellers. We now have hygiene-challenged Silicon Valley imitators—ugly, slovenly, foul-smelling, and probably far richer than those mentioned above. (It’s even worse out west. A hero airman/tycoon Howard Hughes has been replaced by a Jeff Bezos; a champion sailor/magnate Ted Turner, by a Mark Zuckerberg.)

“Once the Electoral College is done away with, big cities like Chicago, New York, and Los Angeles will be all a candidate needs to be elected president.”

Bemoaning the changes can sound bitter, an old man’s cry against progress. It’s nothing of the sort. It’s a protest against ugliness and the constant search for the lowest common denominator. The city’s character has been irretrievably lost, what with diners, cigar stores, newsstands, bars, and strip joints gone forever. Landmarks have disappeared and Times Square is now Hollywood lite, without the grit and splendid squalor of old. Small businesses are disappearing, with ultra-luxury condos replacing them. Yet the quality of those moving into the ultra-luxury flats is less than zero, greed and self-interest being the operative words. Edward Hopper’s 1941 painting Nighthawks, an emblem of the city’s description by E.B. White, is a distant memory, the city’s golden melancholy light extinguished. And over in Central Park the bums of City Hall now tell us that the statues of Robert Burns and Christopher Columbus must come down and be replaced by those of women. (Lily St. Cyr, the most beautiful and sexiest stripper of all time, is my choice, and maybe even Stormy Daniels.)

What is even worse than the destruction of the city’s grandeur is its politics. The major networks are all based in New York, and the hacks working for these networks have had a collective nervous breakdown for the past three years. Led by probably the most dishonest major newspaper in the world, The New York Times (the paper recently reported sexual allegations against Supreme Court Justice Brett Kavanaugh, despite the fact the “victim” had no memory of any such incident; still, the paper published the made-up charge), Trump Derangement Syndrome has morphed into an antiwhite campaign of rare virulence and hate. The structure of white power must come down, is the slogan, and the Supreme Court and the Electoral College, the two institutions that guarantee fairness and equality for all states, are the main targets of this campaign. The loss of white cultural identity will then be achieved through multiculturalism.

That awful Susan Sontag announced back in 1967 that “the white race is the cancer of human history.” Sontag was an opportunistic publicity-seeker all her miserable life, and her very good brain was situated in her backside. Nevertheless, antiwhiteness is now a sturdy pillar of state ideology throughout the Western world. Whiteness is now considered the original sin. My friend and colleague at Takimag Jim Goad has written a book about it, but he has been shut out from TV talk shows and the reviews that move a book’s sales. I’m not surprised. Critics of antiwhiteness are firmly excluded from our culture. We are now on the same level with Afrikaners in the closing days of apartheid in South Africa. Just think: Today’s left holds the position that white-majority countries are hellholes of oppression for nonwhite inhabitants, yet what outs the lie to this notion is that global immigration patterns show nonwhites desperately trying to get into white countries. Jim Goad himself says he hates white people because they already hate themselves far too much.

Well, if you think North Devon people are too white and don’t know people from other countries, come to the Rotten Bagel and see for yourself. It will remind you of Africa and Central America in the future. No picturesque villages, no sweet children playing football barefooted. No bananas hanging from trees, no colorful dresses on lithe females, no fearsome cops—over here they now douse them with buckets of water and the fuzz does not react. The crowds jeer and they go home to change. The cops, that is. The whites are resisting by moving to the suburbs. Once the Electoral College is done away with, big cities like Chicago, New York, and Los Angeles will be all a candidate needs to be elected president. White votes will be redundant. It will be strange to live in Singapore at my age.