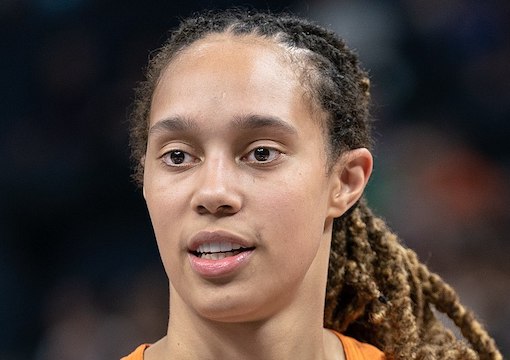 If I had one wish to be fulfilled this Christmas it would not even be Lily James and Keira Knightley abducting me for a 24-hour love session, but for every U.S. Marine guarding our nation’s embassies to put down their guns and declare a 48-hour strike against the rotten regime in D.C. that chose a black lesbian drug smuggler over an American ex-Marine rotting in a Russian jail since 2018. The black lesbian basketball player who was chosen over the Marine used to remain seated during the playing of the national anthem, or if she happened to be standing up, she would turn her back and make sure everyone noticed what she thought of Uncle Sam. Brittney Griner was and is insufferable, and will now enrich herself further by playing the victim. As Elon Musk so correctly put it, “Does it surprise anyone that the Biden-Blinken regime would leave a Marine behind?” Blacks have now turned from eternal victims into chosen favorites, and if any whiteys don’t like it, it’s too bad.

“Brittney Griner was and is insufferable, and will now enrich herself further by playing the victim.”

A nation is judged by the manner in which it treats those who have sacrificed for its birth and growth, and today’s America is the worst example of this principle. Its founding fathers are insulted daily by race hustlers, its history altered to suit today’s fashions, its monuments torn down by con artists and louts hoping to enrich themselves by their vile acts. America is now a country as loathsome as the Soviet Union once was, with the midnight knock at the door replaced by the cancellation of anyone who dares utter a word against the sexual freaks and their enablers in Washington, D.C. Albania may be my next stop.