A Dead-Babies Movie for ALL of Us 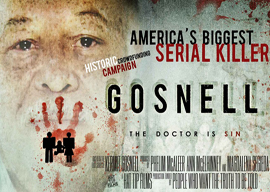 It was 1 a.m. last Tuesday night, and I was drunk and conflicted. The drunk part is par for the course (I doubt I’ve seen a sober 1 a.m. in a decade), but the conflicted part was unfamiliar territory. I’d just returned from a private screening of the new film Gosnell: The Trial of America’s Biggest Serial Killer. I don’t care for the subtitle (there had to be a better word than “biggest,” which suggests that Gosnell is some kind of psychotic Paul Bunyan), but that aside, the movie is quite good. To an extent.

Hence the “conflicted” part. I liked the Gosnell film, and I didn’t.

For anyone unfamiliar with the case, Dr. Kermit Gosnell was an abortion doctor in Philadelphia. Gosnell, who is black, owned a clinic that primarily served women of color. To call him a butcher is unfair to legitimate meatcutters. Gosnell was a depraved murderer. He used scissors to snip the spinal cords of hundreds of babies born alive. He’d induce labor in his patients, sit them on a toilet, and allow the babies to fall into the bowl, where they’d drown. His house made Hannibal Lecter’s pad look like something from Better Homes & Gardens. He stored dead-baby parts in jars and bags, pretty much just for the sake of it.

His operating rooms were swarming with cats defecating freely on the floors, his medical equipment was unsterile.

He routinely botched abortions, resulting in at least one patient bleeding to death after the procedure. Some women had their organs perforated by his tools, while others caught diseases from the filthy conditions. Still others went home with fetal parts stuck inside them. He once forced an abortion on a 15-year-old girl who’d changed her mind when she got to his office. He knocked her out, tore off her clothes, and did the procedure anyway. He employed nonprofessional staff, some of whom had absolutely zero medical training.

And last but not least, he once killed a patient with a Demerol overdose.

A pretty fascinating monster, huh? Would make a good movie, don’t ya think?

Well, it did and it didn’t.

Gosnell was directed by Peabody Award-Winning International Film and Television Star™ Nick Searcy. Nick is an accomplished actor, and an all-around great guy. You might remember him from the FX network’s Justified, or for his role as the villainous general in the Oscar-winning “disabled waif falls for sensitive fishmonster” opus, The Shape of Water. Nick is also the most fearless conservative on social media (yes, I put him above James Woods, because Nick’s been doing it longer). Nick has turned in a really fine movie; I absolutely recommend you see it. Searcy’s directing and John Quinn’s editing keep the film moving at a brisk pace, and Searcy makes wonderful use of a relatively low budget (Gosnell was primarily financed via crowdfunding). There’s nothing wrong with Searcy’s direction; it can only be described as superior.

Gosnell has been four years in the making, and it shows. It’s a movie born of pre-Trump conservatism. Time and again, writers Phelim McAleer and Ann McElhinney, who also co-produced, take every opportunity to make the film as inoffensive as humanly possible. The idea was to make a movie about a murderous abortionist in a way that wouldn’t alienate pro-choicers. A “mainstream” film that seems to have been crafted specifically so that pro-lifers can tell their pro-choice friends, “Hey, you’ll enjoy it. It doesn’t touch on abortion as an issue. It’s a court procedural based on trial transcripts. There’s no bias in transcripts!”

This is McAleer and McElhinney’s stock-in-trade: “inoffensive” conservative films. Just like their 2013 documentary FrackNation. Dry, even-tempered, and bending over backwards not to offend. So nonpolitical, it might just get a good review in an “important” publication like The New York Times!

Well, wasn’t that all of us before Trump? Bending the hell over not to offend, not to sound “racist,” not to appear “sexist,” “homophobic,” “xenophobic,” “transphobic,” and every other “phobic” the left’s invented? Watching our words, hoping and praying that maybe one day CNN will be nice to us? Those days are gone. Trump has given us permission to speak freely, because heaven knows he does. And there’s been a trickle-down effect. Why do you think rightists are always getting booted from Facebook and Twitter these days? Many of us have dropped the Oliver Twist “begging for scraps” bullshit. We’re not trying to be polite, we’re not watching our every word. And since we’re no longer shutting ourselves up, the internet powers-that-be have to do it for us.

“As much as I do recommend the film, I wish it’d been made with Trump-era sensibilities.”

Hungary’s gone right, Poland’s gone right, Italy, Austria, even Sweden have seen their rightist parties surge. This is not the time for milquetoast conservatism. John McCain is dead; his style of conservatism should die too.

Isn’t that what we just saw with the Kavanaugh hearings? Leftists played every card they could: “He’s an attempted rapist,” “He’s a successful rapist,” “He’s a gang rapist,” “He’s a serial rapist.” And Republican leaders responded by saying, “We ain’t buyin’ it. We can’t be manipulated like that anymore. Go ahead—call us rape apologists, we don’t care. This isn’t Mitt Romney’s GOP.”

Let me be clear, especially as I’m so fond of Nick Searcy: In 2014, I myself would have advocated making an inoffensive Gosnell movie. I’d have said, “Play down the controversial stuff. Give us a Law & Order episode that all can enjoy!” And I’d have been wrong. Gosnell lacks punch because, unlike its villain’s forceps, it’s sterile. This should’ve been a raw, ugly, gritty film. Kermit Gosnell is an amazing cinematic bad guy (magnificently portrayed by industry veteran Earl Billings), but we don’t get to see that much of him! We never get inside his head. There are some great moments: Gosnell playing Chopin on his piano as cops are removing body parts from his home; Gosnell eating Chinese food wearing the bloody gloves he’d just used for an abortion; Gosnell responding with a demure “oh my” when confronted with evidence of his unspeakable acts. But we never get to know the psychology of the psychopath. It’s like doing a Charles Manson film without Manson. Bugliosi might be the hero, but Manson is who audiences want to see.

We never learn how Gosnell rationalized his evil (they all have rationalizations; even Manson had rationalizations). My guess is, this void is due to the fact that getting too deep inside Gosnell’s head would have led to the character spouting a lot of “ends justify the means” pro-choice babble, which would have violated the filmmakers’ goal of an “apolitical” film.

Gosnell is afraid to get its hands dirty, at a time when being on the right should be all about getting our hands dirty. Dean Cain’s crusading cop and Sarah Jane Morris’ principled prosecutor could be from any standard crime drama or indeed every episode of Law & Order ever made. Gosnell’s weakest element, its derivative musical score by the normally reliable Boris Zelkin, comes off like an exact copy of the canned “dramatic swelling” pap you get on Law & Order when the cops are about to make a bust. The movie needed something like Howard Shore’s masterful score for Se7en, which was as unsettling as the crimes of that film’s demented serial killer.

I get not wanting to make a “preachy” film. Making the film preachy would have alienated even many of the pro-lifers in the audience (there’s an old saying I just made up that goes, “Even the faithful get tired of being preached to”). But by taking the focus off Gosnell the man, and by purposely avoiding the meatier political and philosophical issues that surround the abortion debate, the film becomes less engaging. Not less good, just less interesting. A relic from the days before the Roseanne reboot and Last Man Standing proved that right-leaning mainstream fare can be honest and hugely popular.

I know Nick Searcy has great passion for the abortion issue, so I can’t help but wonder if he was restrained by McAleer and McElhinney’s safe, antiseptic vision (there was a public spat between Searcy and his producers a few years ago, with Nick briefly walking away from the film over issues relating to final cut. I chickened out on asking him about it Tuesday night because I felt it would be rude. But I probably should’ve).

Needless to say, the inoffensive technique has not produced the desired results. Gosnell has been largely snubbed by the “mainstream” press, and the few pieces that have mentioned it have been roundly negative. “Major movie critics are pretty much ignoring it,” wrote Victor Fiorillo in Phillymag. And what few reviews do exist still attack the film for being “biased.”

Searcy should have made a movie that’s as fearless as his legendary tweets. Still, I really do recommend trying to catch Gosnell while it’s in theaters. The fact that it’s not the film I think it should be doesn’t mean it’s not a good film. It is. I encourage you to see it for yourself and come to your own conclusions.

I want to close with something more personal (while still relevant to my main point). The Gosnell screening was the first time in five years that I found myself surrounded by my former colleagues from Friends of Abe, the Hollywood conservative org. Five years ago, I was expelled for being too radical, a “racist, Nazi Jew.” Most of the people who lined up to applaud my exile did so out of fear that defending me would make them look bad in the public eye. But at the screening, almost everybody welcomed me back with open arms. Three people (out of a room of over 200) gave me the stink-eye, and one dude expressed his displeasure that, in my autobiography, I’d written angrily about him after he’d called me a “Nazi” (which is like telling Brett Kavanaugh that he was wrong to get angry after being falsely called a rapist). But everyone else was cool.

Because it’s the Trump era. And it’s not just that the Overton window has been opened so wide that it’s lunatic to consider a guy like me “radical” anymore; it’s also because people on the right are learning that they don’t have to denounce friends and colleagues just because the left calls them names. Like Lindsey Graham during the Kavanaugh hearings, we’re finding our balls.

Nick Searcy has balls, as much as any man I know (disclaimer: I’m speaking figuratively)…I just wish his film did. Watching our words is so 2014. Our balls need to be out (again, figuratively), and a despicable creature like Kermit Gosnell deserved a film that’s unafraid to condemn him and the vile ideology he (and his enablers) adhere to.

As much as I do recommend the film, I wish it’d been made with Trump-era sensibilities. Kermit Gosnell is, to paraphrase the president, a shithole human, and the film that bears his name should have pulled no punches in telling his twisted tale.