A Desperate Search for Uniqueness 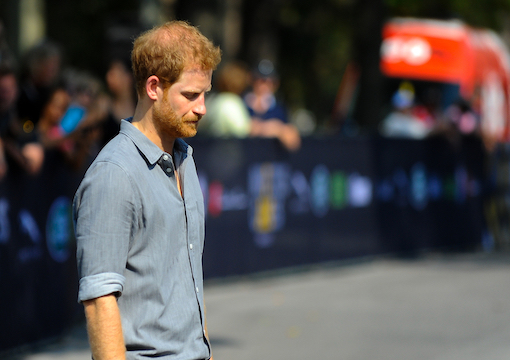 O Hamlet, what a falling off was there!

The contrast between Prince Harry and his grandmother is not only that between one generation and another, but between one conception of life, one culture, and another. I know which I prefer, but others may think, indeed do think, different.

On the one side is an iron sense of duty at whatever personal cost, self-restraint, and a kind of existential modesty despite exalted position, and on the other is personal whim, self-expression as an imperative, and ego as the object of almost religious devotion. There isn’t much doubt as to which of these attitudes to life is in the ascendant, both sociologically and philosophically. As William Blake put it, ahead of his time, “Sooner strangle an infant in its cradle than nurse unacted desires.”

To swallow down our emotions is now regarded as a kind of treason to the self, where it is not merely comical or a subject for derision; for not to express oneself is to risk later psychological disaster. And while the Queen is fully aware that she owes her importance to an accident of birth, Prince Harry believes, or gives the impression of believing, that he owes an accident of birth to his importance. The first results in a sense of duty, the second to a sense of entitlement.

This difference is not, of course, confined to the generations of the British royal family. On the contrary, it proves that such is the power, though not necessarily the virtue, of modern culture that a cosseted and highly unusual family is not immune from its influence.

“In an age of celebrity, not to be outstanding in some way is felt almost as a wound.”

The naming of Harry’s baby was emblematic of a cultural shift, good or bad depending on your point of view, but by no means limited to the royal family. There has long been a tendency for people of rather weak sense of self to give their children unusual or even wholly unprecedented and made-up names, as if by doing so they are becoming more individual themselves.

Perhaps the phenomenon is best studied in France, where until comparatively recently parents were obliged by the state to give their children a name selected from an approved list—a long enough list, names derived from the names of saints or biblical and classical figures, but a list nonetheless. No doubt the prohibition of outlandish names was felt to improve the integration of society as a whole.

Even before the law was repealed in 1993, people began to give their children names that were not on the approved list. (I do not speak here, of course, of the fact that Muslim names were not on the original list.) After the repeal of the law, the number of parents giving their children unusual names rose exponentially, and now 15 percent of children born in a year receive names that three or fewer children are given in France that year, many of those names being completely original in the sense that bad modern architects are original.

The lower down the social scale you go, the more prevalent are such names, but no class is exempt from the tendency. Nor, of course, is the tendency unique to France, and probably didn’t originate there. I am told that in Brazil, the number of given names in any year has reached 50,000 or more.

What does this signify? As I have said, I think that it indicates a desperate search for uniqueness or individuation among people who have a weak sense of self as distinguished from others. But why should they seek such uniqueness or individuation in the first place, why should it be so important to them? I suspect, though I cannot scientifically prove, that in an age of celebrity, not to be outstanding in some way is felt almost as a wound, certainly as an indication of failure.

In addition, the inflamed need for individuation causes people to be reluctant to accept anything traditional (such as a name for their child) precisely because the tradition did not originate with them and has no justification that they consider wholly rational. Why, then, should a child be called James or Angela rather than Basket or Pigpen? The child is mine, I should have the right to choose its name; just as, in due course, the child will have the right to change his name when he is old enough. Life is all about choice: my choice, that is.

The extension of choice is why transgression is a good in itself. Therefore, when Harry (and, presumably, his wife) chose the name of Archie for their baby, not as a diminutive of Archibald but as a name in itself, they were striking a blow for freedom and progress. No royal child, and probably rather few children, had been given such a name before; it was not only nontraditional but anti-traditional; it was original, the expression of unfettered human will; it was transgressive. Therefore, on many counts, the choice was a laudable one. Never mind that Prince Archie (were he ever to attain the rank of prince) sounds as absurd as King Béranger in Eugene Ionesco’s absurdist play Le Roi se meurt.

Of course, Prince Harry is not being quite straightforward. He wants to destroy tradition and at the same time benefit from its continuation. He has no claim to the public’s attention except that he was born who he was in the very tradition that he wants to overthrow because he wants to be really, truly, just himself. I can well understand why a young man in his position does not want to play the part allotted to him by fate; I wouldn’t have wanted such a part myself. But in order not to be a hypocrite, he should have gone off quietly into obscurity, without public subvention, there to study butterflies or Sumerian epigraphy, or whatever took his fancy.

He has rendered a service, however, by holding up a mirror to our modern egotism. He is, so to say, the selfie, the tweet, and the Facebook page made flesh.