A Different Kind of Island 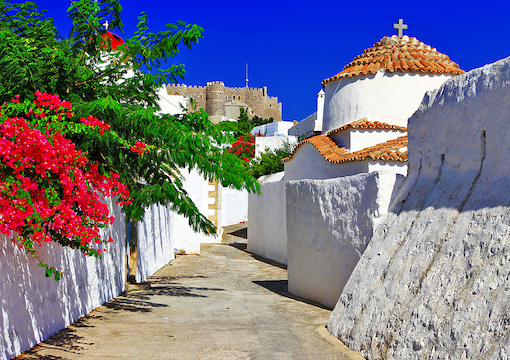 GREECE—I’m in Patmos with four grandchildren, two children, and a wife. I know, I know, it sounds very lower-middle-class and is, only Bournemouth and some sun beds are missing, but who cares? Children have friends, and grandchildren even younger friends, so it’s not all gloom and doom. At dinner the other night up at the piazza, which holds about forty tables, there was not a single Philip Green type among the guests, and looking back I cannot remember having had a more pleasant dinner setting ever, perhaps once in Sienna long ago. Chora, the section of the island where the piazza is located, I’ll match against any town or village as far as beauty is concerned. IRTs, or international rich trash, go to Mykonos, the South of France, now even the Hamptons. Sensitive souls go to Patmos. My son’s boy Taki is 15 and his daughter Maria, 13. My daughter’s boy Antonius is two and a half, her girl Theodora a 1-year-old. The last two are so blond, back in the bad old ’30s Hitler would have decorated the family for their looks.

Commanding and imperious, the Monastery of St. John the Divine stands at the island’s highest point, trumpeting the Greek Orthodox faith. The Greeks call Patmos the Jerusalem of the Aegean because within a cave John, the disciple of Christ, envisioned the Apocalypse while banished by the Roman emperor Domitian in 95 AD. The Monastery was founded in 1088, and it continued to function as a Christian beacon throughout Venetian, Turkish, and Italian invasions. I first came here on Bushido No. 1 long ago. The place was empty and wonderful, the locals friendly and softer than in other islands.

I had a very young Swedish girl on board, one we christened Lolita for obvious reasons, and on the first day she stripped away her top, as Swedes tended to do before the world’s other females followed. A grizzly old fisherman told me to sail west, to Mykonos, “where all the whores are.” The grizzly one got one thing right: Mykonos did become a whorehouse eventually, but that’s a different story altogether. Patmos has remained a family-oriented island, although my boy J.T. seems to get lucky nonstop, and in a family setting to boot. Go figure, as a Persian first said in Marathon while running for his life.

Patmos is dotted with small settlements, bays, and beaches, and has a population of about 3,000 during the offseason. The architecture of the island is Byzantine—all whitewashed perhaps, but Byzantine nevertheless as the nucleus of the place was created at the beginning of the 12th century when Byzantium and Hellenism ruled supreme. The Venetian takeover and eventually the Italian one beautified the place, and with its distinct Greek features the island is perfection itself. Upper-class Greeks like Prince Michael of Greece discovered the place and bought houses while more nouveaux Hellenes invaded Spetses and Mykonos. Perhaps because I am from the Ionian Islands— which have never felt the Turkish yoke, just the Venetian and British ones—I feel closer to a civilized place like Patmos than the whorehouses some of our islands have turned into. Paxos, Antipaxos, and Cephalonia are the Ionian isles that have kept scum out. The most civilized of all, Zante, where the Greek aristocracy and her greatest poets come from, as well as the Taki family, has been totally ruined by the very same English gentlemen that ran riot in London during the European Cup Final. These malodorous freaks are viewed as typical Brits nowadays, and it is a losing battle to try to explain otherwise.

Never mind. I’ve rented the most wonderful house outside the main town overlooking a beach, one owned by the lady chairman of Anderson & Sheppard. I’ve been a client of theirs for fifty years and still wear the suits I had made there when I was in my 30s. This has been the first summer not sailing since I was in my 20s, and this is because the family put their foot down. Tiny children in a large, heeling sailing boat are as vulnerable as “democratically elected” African strongmen, and need just as many bodies around them to ensure their safety.

Last week my daughter and Alexander Schwarzenberg gave a riotous dinner at a taverna downtown, followed by some heroic drinking up at the piazza. A woman approached me as I was starting to feel comatose and told me I had been rude in print about her father. His name, she said, was Chalabi, the very con man who talked the half-wit Bush and mendacious Blair into attacking Iraq. After one million dead, Chalabi had the grace to drop dead himself. I said that it was the column I was most proud of. Tamara Chalabi accepted it with grace.