A Figure of Speech 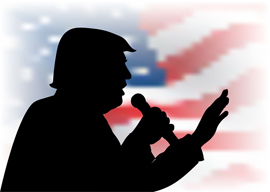 I don’t much care for Mr. Donald Trump as a person. He strikes me as vain, vulgar, blustering, boastful, shameless, and fundamentally uninteresting except as a specimen of one of the extremes of human character. I doubt that I would want to spend more than thirty minutes in his company. His attachment to truth seems loose, and from what I have heard (though I could not testify to anything in court from personal knowledge), his business dealings have sometimes varied between the incompetent and the unsavory.

A man’s public persona may be different from his private character, of course: Former president Hollande of France, who seemed as dull as ditchwater whenever he appeared in public, is said to be a very amusing man in private. I don’t find it easy to believe that Mr. Trump is very different in private from how he is in public, but all things are possible.

More important, however, his policies, whether they are right or whether they are wrong, are all capable of rational defense. I am not party to how they are decided, or to what extent they are actually his, but they are not the product of a diseased brain. President Trump may seem unpredictable, but in a world in which not everyone is your friend, unpredictability may be more rational than predictability, and by no means the product of mental instability.

When I read in my morning newspaper that the General Assembly of the United Nations had greeted Mr. Trump’s speech with derisive laughter, my esteem for him rose somewhat. I decided to watch the recording of the speech for myself.

“For the newspaper, the delegates to the General Assembly were the world, thus bearing out Trump’s animadversions on the dangers of world government.”

I discovered that my morning newspaper, of the party of the bien-pensants, had misled me. True it was that one of Mr. Trump’s boasts—that his administration had achieved more in two years than almost any other in American history—was greeted with laughter; and for myself, I found some of his boasts foolishly hubristic, for example that the stock market was at its highest point ever. This is no doubt true, but if history is any guide (and here it is our only possible guide), it can go down as well as up. Will Mr. Trump then be boasting of the largest correction, as economists call a slump in share prices, in history? As it used to say on the sides of buses in Nigeria—perhaps it still does—“No condition is permanent.” Some of his policies may yet end very badly, but that is true of anyone’s policies.

Actually, the laughter in the General Assembly gave rise to Mr. Trump’s finest moment. He took the laughter in good part, admitted that he had not expected it, and said it was perfectly all right. But the moment of laughter revealed something about world opposition to Mr. Trump: that it is bogus or not deeply felt, and is pro forma as it were. Would the General Assembly have laughed disrespectfully at Mr. Putin or Mr. Xi Jinping, and would either of them have reacted in the same good-natured way if it had? Did anyone laugh at Mr. Obama’s fatuously grandiose claim that his election marked the beginning of health care in the United States and the healing of the planet, at least the equal in absurdity of anything said by Mr. Trump? Is Mr. Trump’s slogan “Make America Great Again” any shallower than Mr. Obama’s “Yes We Can”? The fact is that Mr. Trump is held to a different standard; but if anyone truly believed that he was an incipient totalitarian dictator, as is sometimes claimed by his opponents, he would not have laughed.

What my newspaper did not tell me was that, apart from this moment of hilarity, Mr. Trump’s speech was listened to with decent respect and drew applause at its end. How far this applause was purely polite, and how far a sign of agreement, I cannot say; but to have reported the speech as if it had been greeted only with derision was false and misleading.

What is more, his speech offered a more generous view of the world than that of most of his opponents. He called on the people of all countries to be patriotic, acknowledging that people of all countries had something to be patriotic about. His was a vision of the world that was far more genuinely multicultural and multipolar than those who believe in or call for a kind of European Union on a global scale, in which all cultures are ground into a food mixer from which a health-giving culture juice of universal rights (to health care, social security, etc.) will emerge.

By no stretch of the imagination did Mr. Trump’s view of patriotism entail the hatred of or disdain for, let alone enmity toward, other countries. Whether his generous appreciation of the cultures of other countries truly reflected the innermost state of his feelings, I cannot say; I can only go, however, by what he said. And what he said in essence was that he wanted a world of live and let live.

Of course, his speech simplified matters. His outlook presupposed a stable and unchanging comity of nations, whereas there are places in the world where the proper boundaries of national sovereignty are still in dispute. Nor is irredentism an entirely spent force in the world. It is difficult to have patriotic feelings toward a country to which you do not feel that you rightfully belong. But at least Mr. Trump appeared to understand that a world government without borders would necessarily be a monstrous bureaucratic tyranny with no possible legitimacy.

In a short speech he simplified other problems, too, as all politicians do. He spoke of the disadvantages to American workers of cheap Chinese imports without mentioning their concomitant advantages to American consumers, or of the role of the dollar as the world’s reserve currency in the creation of and continuation of the situation. But political speeches are not soliloquies by Hamlet wondering whether to put an end to it all, and to look to them for subtle elucidation of knotty problems is like looking to tabloid newspapers for metaphysical insight.

My newspaper’s headline to its article on Trump’s address to the General Assembly was ‘The world’s derision halts Trump UN speech.’ For the newspaper, the delegates to the General Assembly were the world, thus bearing out Trump’s animadversions on the dangers of world government. Much has been written on the pathology of Mr. Trump, from some of which I do not demur; but there is pathology in the response to him, too.