A Hunger for Literature 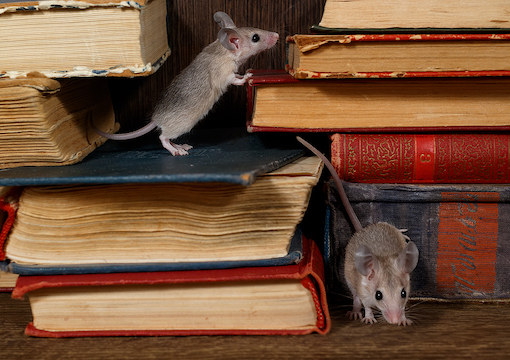 The mice in my absence have been at my books again, with what Marx called, with regard to the manuscript of his then-unpublished Ludwig Feuerbach and the End of Classical German Philosophy, their gnawing criticism. Much good may gnawing it have done them! When finally published, forty years after it was written, the manuscript did considerable harm, at least if ideas have consequences, for as an appendix to that work is inscribed one of the most beguiling and pernicious of all epistemological doctrines, namely that people’s ideas are simply the reflection of their interests; from which it follows that, since people’s interests are different and irreconcilably opposed, the only real argument is violence. And we all know what that idea led to.

But this time the mice did not go for Marx, perhaps because he was on upper shelves and they could only reach the lower. There they nibbled instead at the seventh edition of Brain’s textbook of neurology, though they got only as far as the index. How odd it was that the most prominent British neurologist of his generation should have been called Brain, while that of the previous generation was called Head. It is almost enough to make you believe in the theory of nominal determinism, according to which your surname determines your profession. This cannot really be, however, for not far from where I live in England is a firm of estate agents with the wonderfully euphonious name of Doolittle and Dally, which cannot surely reflect their business practices or they would long have ceased trading.

The mice also went for Griffith Edwards’ book on the treatment of alcoholics. I never really believed in the disease concept of alcoholism, though obviously drinking to excess has medical, among other and numerous, consequences. Still, I liked the idea of inebriate mice in search of a solution to their problem. I always felt an instinctive sympathy for alcoholics, whom I much preferred to drug addicts. It was not only that I like a drink myself, and would drink more were I not so susceptible to the horrors of hangover, but they, the alcoholics, seemed to me more genuinely tragic and less mendacious than the drug addicts (of course, I speak in generalities). This is not to say that they never said things that were untrue; for example, they often claimed that they drank because their marriage had broken down, when in fact it was the other way round. But which of us never deceives himself?

I was upset mainly by the damage the mice did to a third volume, Human Aggression by Anthony Storr. It was an elegant slim volume in perfect condition until the mice exercised their murine aggression on it.

“How odd it was that the most prominent British neurologist of his generation should have been called Brain, while that of the previous generation was called Head.”

Storr was an elegant speaker and writer, whose beautifully modulated and cultivated voice I can still hear in my mind’s ear—the kind of voice now excluded from the British airwaves because it is too clearly that of an expensively educated man, and social resentment of many stripes has nowadays to be appeased.

He wrote in a lucid way on such subjects as solitude and the appreciation of music. One of his most famous essays, titled “Churchill’s Black Dog,” popularized the idea that Winston Churchill suffered from severe depression, if not from what used to be called manic depression. Storr himself was something of a depressive, and as he had shared some of Churchill’s early life experiences, he came to see in those experiences the cause of Churchill’s supposed depression.

I think Storr was mistaken and that Churchill was never seriously depressed during his active career. It would have been surprising, not to say incredible, if Churchill had not suffered (or perhaps I should say experienced) changes of mood in response to his circumstances, which varied from triumph to tragedy, from prisoner of war to world statesman; he would have to have been inanimate not to have done so.

I am pleased to have assisted a little in the chapter on Churchill’s supposed “Black Dog” in a book by my former colleague, Prof. Allister Vale, and his coauthor, Dr. John Scadding, on Churchill’s medical history, Winston Churchill’s Illnesses 1886–1965: possibly the most meticulously researched, best documented, and most authoritative medical histories of any great figure ever written, certainly of any known to me. The chapter proves, at least to my satisfaction, that Storr was in error.

The question, then, is why Storr’s thesis should have been so quickly and almost universally adopted, without much examination or serious criticism. To this question, which I think is one of some cultural significance, no definitive answer can be given. Storr was a very persuasive and clear writer notwithstanding his allegiance to Jung, and what he writes is never less than plausible. Mere plausibility, however, or plausibility alone, is not a criterion of truth, as Vale and Scadding’s work demonstrates.

But I think that the uncritical acceptance of Storr’s thesis is not attributable only to the brilliance and clarity of his writing, unusual as it is in the field. Rather, it was a thesis for our time, and eagerly seized upon.

First, of course, it cut Churchill down to size somewhat, by making him almost a psychiatric case, if not an outright patient. This is fully in accordance with the dominant type of historiography of great figures nowadays (and ever since Lytton Strachey, in fact), which might be called feet-of-clayism, the kind of history that would claim that Mozart’s femme de ménage was the real composer of his works, and that in fact he purloined them from her.

And then there is the opposite impulse, also satisfied by Storr’s thesis, namely that to elevate those suffering from mental disorders to make them superior to those who do not. Indeed, there was a best-selling book about the mental disorders of great leaders that maintained that Churchill’s relative prescience or clear-sightedness about Hitler was the consequence of his inclination to depression and therefore to pessimism, which in regard to Hitler was fully justified. Therefore the last shall be first, and mental disorder is, if not good for you, at least a precondition of great achievement and a proof of sensitivity. I think this is Romanticism, or wishful thinking, thinly disguised as psychological depth.

But I still wish the mice had not nibbled away the corner of my Storr.