A Matter of Chatter 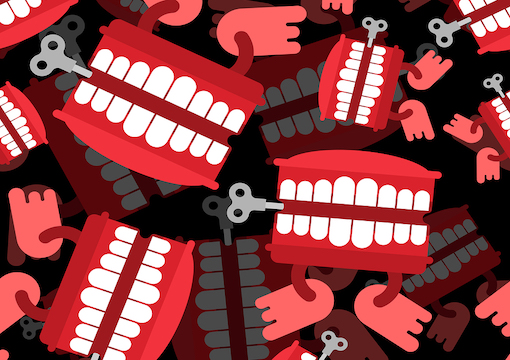 The weather was fine—I do not remember a spring as fine as this, but perhaps I have never before had so much time in which to remark upon the weather. In Paris, however, they have not yet opened the parks or gardens, for fear, I suppose, that people would fail to keep their proper social distance. Better, then, to let them crowd in the streets and breathe all over each other: Such is the faith that the government places in those it is called upon to rule. A modern democracy, we should not forget, is a people of the government, by the government, and for the government.

The sunshine called me outside and I took my book to sit on some public benches a few hundred yards away. They were near a T-junction of two one-way streets, one of which ran along the wall of a cemetery and the other of which ran into a large square another few hundred yards off. There was a taxi rank in this street. Some of the paving stones have been inscribed, by means of white paint and a stencil, with a single word: Macronavirus.

I sat on the bench and watched the joggers go by before I opened my book. I have never seen a happy jogger, but many joggers seem to me to wear an expression of moral self-satisfaction or superiority on their faces, much like that of evangelical preachers who know that Jesus loves them and they are going straight to heaven when they die. Perhaps I perceive what is not there on their faces from a sense of guilt that I am so physically lazy, thereby shortening my lifespan. I console myself that those who pound the asphalt will suffer, sooner or later, from osteoarthrosis of the hips and knees.

“Do the people who turn their radios to drivel stations hear but not listen?”

I observed the tattoos of the runners. Proletarians don’t jog, of course, unless they are also boxers, so all the tattooed joggers were middle-class. Why there has been this sudden epidemic of self-mutilation among the educated, I do not know. Looking at the way people dress, even when not jogging, I concluded that our modern mode of dress is the continuation of self-mutilation by other means. One tattoo caused me particular discomfort to look at, namely a slogan tattooed in blue lettering in a man’s popliteal fossa, that is to say at the back of the knee. I cringed as I tend to do at the sound of a piece of chalk squeaking down a blackboard. I couldn’t read the slogan, the man went by too fast. Who did he want to read it and in what circumstances?

I started to read my book, a work of literary criticism of a writer about whom I have been commissioned to write an article. In these circumstances, one should read neither too much nor too little, in order to negotiate the narrow path between complete ignorance and pedantry. Then a shiny black BMW taxi drew up, an electric or semi-electric vehicle. I think it probably cost about as much as my flat.

I don’t like the noise cars make, but when they are almost silent, I suffer from a different emotion—fear. Surely their quietness must cause accidents, as people step in front of them on the assumption that there is nothing coming because they hear nothing. I can even foresee my own death in this fashion. Perhaps they—the all-wise authorities—will one day decree that motor manufacturers must put a noisy mechanism back into their engines, just as the smell was put back into natural gas or color into methyl alcohol to warn people that it was not ethyl. (Such is the perversity of Man that I have known people who drink methylated spirits precisely because, and not in spite of the fact that, the label was printed with a skull and crossbones with the warning words that drinking the contents could lead to blindness.)

But what the taxi lacked in engine noise, it made up in radio noise. Having arrived at the rank, the driver lowered his window and turned his radio on full blast to a station of driveling chatter.

There is a strange thing I have noticed in my travels around the world. The intonation of driveling chatter, or chattering drivel, on the radio is the same all over the world, no matter the language, and easily recognizable. For example in Turkey, a country to which I go once a year for a few days but whose language I do not speak beyond ordering a glass of raki and thanking the waiter when he brings it, I immediately spot the intonation of bright shining drivel in any taxi in which I ride. Drivel is the Esperanto de nos jours. I have heard it in so many places, from Russia to Brazil.

Do people actually listen to it? “You see but you do not observe,” said Sherlock Holmes to Dr. Watson: Do the people, then, who turn their radios to drivel stations hear but not listen? But if this is so, why do they have the radios on in the first place? I have had two great blessings in my professional life: The first is that I never had to commute, and the second is that I was never subjected to radiophonic drivel except when I took taxis or went into the nursing stations in my hospital.

There are probably as many people now who turn on their radio as soon as they wake as used to light a cigarette in the same circumstances. Is it that the former fear to be alone with their thoughts? The great advantage of the radio used in this way is that it drives out one’s own thoughts without replacing them by any others. I believe that certain kinds of mystics want to achieve this state of mind, namely that of consciousness without any content. Never has the world had so many mystics of this stamp.

The drivel disseminated from the taxi (to judge from its volume, perhaps the driver thought he was performing a public service in letting everyone hear it, and gratis!) drove me back indoors. It was impossible alike to listen to the radio or to ignore it. You hear but you do not listen!

Theodore Dalrymple’s latest book Embargo and Other Stories has recently been published by Mirabeau Press.