A Question of When, Not If 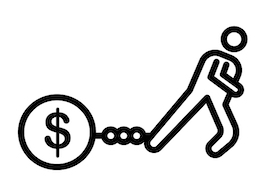 There are few quiet pleasures greater than that of contemplating future catastrophe. Fortunately, we are spoiled for choice; if it isn’t the return of the Spanish flu, it’s the melting of the Himalayan glaciers or the complete collapse of the world financial system. The latter is my favorite: Justice will be restored and we will all get our well-deserved comeuppance. Some of us have been spendthrift on credit, others have been miserly and failed to stimulate the economy, and yet others have carelessly paid no heed to the warnings of the financial tsunami to come.

For several years I have been an intermittent reader of a financial newsletter that has been predicting, more or less weekly, the imminent collapse of the system. The trick, I suppose, is to choose the correct week in which to panic, for one day (if history is anything to go by, and we have not much else to guide us) it will be right, there will be a financial Armageddon. In the meantime, however, life continues on its mediocre way, neither wholly satisfactory nor wholly unsatisfactory, neither entirely joyous nor wholly wretched, neither always interesting nor always boring.

Contemplation of catastrophe to come is a good way to stave off boredom. It has all the advantages and interest of catastrophe without the inconveniences. And a week or so ago I read in my newsletter a warning of impending doom so compelling (to a financial ignoramus such as I) that it delighted me. Since what follows is so derivative, I must acknowledge the author whose ideas I am relating, a financial analyst called Nikolai Hubble.

Disregarding the usual self-praise of financial analysts who emphasize the correctness of their past predictions, or those of the organization for which they now work (they are usually somewhat less forthcoming on the details of their predictions that did not come to pass), the picture painted initially seemed to me convincing enough. Naturally, no prediction of doom is pleasurable unless it is at least plausible, unless it flatters or fans into life ideas that already exist in embryo in a person’s mind; and I have long believed that we are dancing on the edge of a financial volcano.

“I have long believed that we are dancing on the edge of a financial volcano.”

Our alarmist author informs outsiders such as I that those in the financial know are already moving their assets into the supposedly safe haven of Switzerland. I have no idea whether or not this is true, but I am only too willing to believe it. It is certainly true that last year the stock price of European banks more or less halved, suggesting that institutional investors know something about their shakiness that I, poor wretch of a small customer that I am, do not, thinking that a euro or dollar or pound that I deposit in them is perfectly safe and will be returned to me when I need it.

The value of Italian bonds has declined, the rate of interest demanded for the issue of new ones has risen (as it has for several other southern European countries), and the Italian government has chosen this moment to increase its spending. But European banks hold immense quantities of Italian bonds, which they have been allowed to designate for accounting purposes as riskless assets, unlike all other types of asset. A plunge in their value, however, would be more than sufficient to wipe out the capital reserve of many large banks, which are all exposed to Italian (and other) debt by means of interlocking loans. When some banks sneeze, others will catch pneumonia; and the sums involved when this happens are so enormous that the consequences will be incalculable.

The banks will not be able to meet their obligations, and, as in Cyprus not long ago, deposits will be frozen and a proportion of them will be taken—simply expropriated—for recapitalization. (This happened to a neighbor of mine who sold his business for a few million and deposited the proceeds in a Cypriot bank because of the superior rate of interest that it offered, only to find shortly afterward that nearly 10 percent of his money had in effect been stolen, while access to the rest had been so restricted that it would take him many years to draw it out.)

In the event of a collapse in the value of Italian and other bonds, the banks’ freeze would no longer be peripheral, confined to Greece or Cyprus, but be pan-European. If it were, economic activity would seize up, share prices would plunge by half at least, millions would end up devoting their lives to finding enough to eat, and barter would again be the main means of subsistence. It is unlikely that enormous populations would take this as calmly as have (all things considered) the people of Greece. Britain would be particularly vulnerable to violent unrest because the family has been so comprehensively smashed up by government policy that all social solidarity has therefore to pass through the state, itself bankrupt and unable to meet its obligations. Moreover, while the educated Greeks were able to emigrate to more prosperous lands, no such safety valve will exist for the scores of millions of Europeans. Revolution is but a financial collapse away.

Why has this situation been allowed to develop? According to our author, governments, central banks, and commercial banks have all colluded to keep the whole system going. With few exceptions, governments have to continue to borrow to keep, however minimally, the promises that they have made to their populations. Not to borrow would require retrenchment so severe that it would result in political chaos.

But is panic, which my article suggests is the rational response, justified? Debt is not itself harmful if it can be serviced and if it is employed for economically productive ends, and the proportion of GDP taken up by servicing debt in Europe is by no means at an unprecedented maximum. The national debt of Japan is more than twice Britain’s proportionate to its GDP, but to service it costs less than half of the proportion of its GDP that it takes Britain to service its debt. This suggests, to me at least, that Japanese borrowing has been far more productive than British, which has been used largely to support a standard of living of a large part of the population that has not been earned. A debt expended to furnish the masses with fast food and flat-screen televisions is not the same as debt that is in incurred in (among other things) constructing a superb infrastructure. In other words, the Japanese have been serious and the British frivolous.