A Quiet Game of Tennis 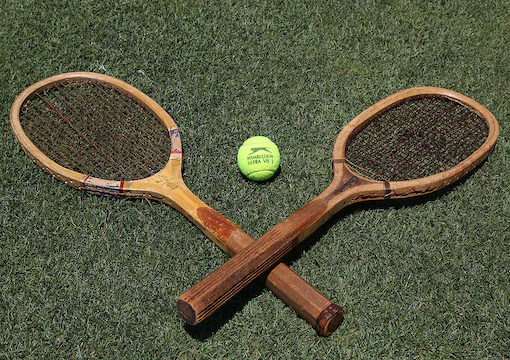 Wimbledon is here at last, after the missing 2020 year. What struck me watching the French Open a couple of weeks before on TV was just how much rubbish I had to listen to if I kept the sound on. There are now too many matches broadcast, which means more and more commentators spouting off about the game in the middle of rallies. I don’t know what it is that makes viewers accept these nonstop blabbermouths who interrupt their viewing without raising hell with the networks. We’ve become a nation of sheep, accepting everything so-called experts throw at us. Televised sporting events do not actually need commentators except before and after the event. Back in my day Wimbledon had the impeccable Dan Maskell, whose “Oh my word” was as far as he went after an extraordinary shot. After Maskell came the great South African doubles expert Frew McMillan, who handles the mike as deftly as he handled his racquet while winning the Wimbledon doubles numerous times. Frew was a buddy of mine during our playing days, and he is the only one today who allows the viewer to watch the action without being told nonstop what he’s watching.

What is puzzling is why viewers put up with it. Sport, after all, is a spectacle that needs the minimum of information, since the action takes place in full view of the audience. As the great Groucho Marx once told the viewers in Horse Feathers, “I’ve got to stay here, but there’s no reason for you folks not to go out in the lobby until this blows over.” Such a preamble should be enforced on all these highly paid blabbermouths before each broadcast. But I’m just whistling Dixie, as they used to say about lost causes.

“There are no more televised sporting events that allow viewers to make up their minds.”

There are no more televised sporting events that allow viewers to make up their minds. It is an epidemic of excess by the speakers, sorry, commentators, to give them a bit more gravitas. They explain the evident, what we just saw, and then some. TV’s primary mission is to show us, and then to verbalize what we just saw to death, and then to explain further. None of them has ever heard of the word oxymoron, the definition for redundancy of expression. In this case, visual oxymoron. Never mind, perhaps it’s only me who likes to watch tennis without someone explaining to me what I’m watching.

My nerves were tried and fried by watching the French where the rallies can be very long, and the blabbermouths very wordy. The latter are mostly adulatory toward the players, as it’s normal for them to be. But they look to be on the take when Serena is on court, and also Djokovic. After losing an important point during a match in Paris, the Serb bounced the ball 23 times before serving. Usually he bounces it 13 times. If that’s not gamesmanship, my name is Coco Chanel. Again, perhaps it’s only me, but American women commentator voices, some high-pitched and shrill, also get on my nerves. Not Chrissy Evert’s, however. Chrissy was always beautifully behaved on court and always looked pretty and feminine while winning. She and McEnroe should be the only Americans employed by European TV networks, although Mac—though very good when he started broadcasting, always telling it like it is—has now joined the rest in being more of a cheerleader than a critic.

One of those American females commenting in Paris remarked on how empowering it was to watch a woman taking control of her body. How was that again? If we’re going to have this kind of psychobabble while commenting on a tennis match, I think I’ll start watching wrestling, the pro kind that involves masked bad guys and screaming women in the audience. If we follow the American way we’ll soon be using the F-word to express sincerity and enthusiasm, not to mention conviction. But let’s get back to the game of tennis.

The reason tennis was once upon a time referred to as an elite game (played only by country-club types) is easy to explain. Wooden rackets and animal gut strings made it among the most difficult games to master, if not the most difficult. If one failed to make contact with the ball in the racket’s sweet spot—a diameter of about eight inches—the ball flew out or didn’t go anywhere. If one didn’t step into the ball’s path and take it on the rise, the return just died. If one didn’t meet the ball sideways, ditto.

All of the above are now no-no’s. Strings now grip and slingshot the ball; graphite, titanium, and all sorts of rocket-material-made rackets have turned everyone into a champ. Open-stance forehands, swing volleys, and from-the-baseline drop-shot attempts are now obligatory. I remember an article about the fastest server in the game, Pancho Gonzales, serving close to 97 mph. Today a 15-year-old’s second serve tops that speed. See what I mean about tennis being a different sport from the one I grew up competing in? Touch and guile were equal to power, so don’t compare the greats of today to those of yesteryear. Rod Laver, Lew Hoad, and Roy Emerson were as good if not better than today’s great troika, and they didn’t have the entourages of today; no dermatologists, cosmetologists, electrolysists, masseurs, coaches, trainers, dieticians, strategists, and cheerleaders. Enjoy Wimbledon with or without sound, and take it from Taki on tennis: It’s a totally different game.