A Regime of Bread and Circuses 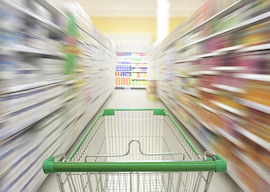 Supermarkets are undoubtedly convenient, but convenience and a large choice of cheap comestibles is far from being the highest human good. Supermarkets destroy the small commerce of towns, which is essential to their social life. I try not to use them, but like everyone else I resort to them whenever I am in a hurry, which, even after my retirement, is most of the time. I experience a sense of guilt as I do so, for if we do not use the smaller shops they will disappear completely. If they do, we cannot blame the supermarkets; it is we who are responsible for having chased after false gods by patronizing them.

Supermarkets have severed the population from an awareness of the seasonal rhythms of nature, at least where food is concerned, until they scarcely exist for us. Everything is available all the time, imported from the far ends of the earth. Only a few commodities, such as lychees and artichokes, remain available only seasonally, and Man does not live by lychees and artichokes alone. (The best lychees, by the way, come from the island of Réunion in the Indian Ocean.)

I dislike supermarkets for their horrible compulsory music, pumped into them like poison gas; one feels as if one were an experimental laboratory rat trapped in a cage, manipulated by psychologists who are trying to determine precisely what kind of music makes people buy more of what they don’t need. And the fatuously jolly announcements from time to time, informing the customers of the good news that there is a reduction this week in the price of nougat, complete my irritation.

“I dislike supermarkets for their horrible compulsory music, pumped into them like poison gas.”

But last Monday, my wife and I were obliged to shop in our local supermarket when we returned to our house in France because in France Monday is the new Sunday, when most small shops close for the day. I suppose this makes commercial sense because, the weekend still being the weekend, people are free to shop on Sundays as they are not on Mondays. All the same, I regret the passing of one day in the week when everything closes down and people have a day of rest from both their work and their play, to say nothing of their shopping. But I suppose a true day of rest would confront them with the nullity of their own lives; their inability either to reflect or occupy themselves with other members of their family without outside stimulation would be laid bare. Under a regime of bread and circuses, the show must never cease.

Be that all as it may, we found ourselves in our supermarket, and suddenly, to my surprise, I was taken back to my days of visiting communist countries where supermarkets, so-called, consisted of long rows of almost empty shelves on which there were a few bottles of brown fruits or vegetables (impossible to say what, exactly, from their appearance alone), which even those desperate for something to buy turned down.

Of course, the supermarket in France would still have seemed a veritable cornucopia to the inhabitant of any communist country of the 1980s, but all the same it was something of a shock to find that there was practically no fresh produce at all to be found in it, as though it had been visited by locusts. In fact, it had simply not received any deliveries for three days and had therefore run out of stock.

The shock was a salutary one. The shortage, after all, had been brought about not by a serious economic collapse or the outbreak of civil war, but by the action of a relatively few thousand people blockading the warehouses and roads to protest a rise in the tax on diesel. Without going into the rights and wrongs of the protest—the protesters believe that the president, Emmanuel Macron, is completely out of touch with the economic realities faced by the ordinary people of France, and does not know what it is to worry about his mobile phone bill, or his subscription to cable TV and other items of first necessity—it performed the useful function of reminding us how fragile is what we so lightly take for granted, namely a constant and uninterrupted supply of raspberries, bananas, and so forth.

I was reminded by the empty shelves not just of communist countries but of a short story by E.M. Forster, written in 1912. One does not normally associate the name of Forster with science fiction, rather with the emotional tribulations of the Edwardian upper middle class, but in fact he wrote one of the most brilliant and prophetic dystopian tales ever published, well before any of the phenomena he described existed or was even a gleam in anyone’s eye. The story is called “The Machine Stops.”

In it, practically all of mankind lives underground in individual cells that are supplied with food, fresh air, and everything else by a giant distribution machine whose precise working no one understands. There is practically no personal, physical, or face-to-face contact between people, such contact now considered faintly disgusting. If for some reason people have to travel to another part of the globe they do so without setting foot on the earth’s surface, which is regarded with repugnance. Almost all personal communication is by means of screens.

The resemblance—if not to our modern world exactly—to trends in our modern world is very striking. Children already spend more time looking at their screens than in being with each other or with anyone else. An increasing proportion of what we need or want is delivered to our homes without us having to move from them. I certainly could live without ever having to leave my house.

In the story, the machine that delivers everything and makes electronic contact with others possible breaks down. Everyone is helpless in the face of this breakdown; they have been so far removed for so long from the need to produce or mend anything for themselves that they have no idea what to do. Their dependence on the machine is complete, and when the machine breaks down they will soon perish.

Of course, there is no single machine in our world that operates like the machine in Forster’s story. But if the internet were to crash, and the electricity, gas, and water supply were to fail simultaneously, I and most of my fellow citizens would be as helpless as a newborn rat.

Of course, the protests in France will not last long, and I will forget all about Forster’s minatory parable.