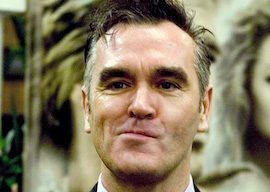 Pop music, like anything showbiz, is hardly as it appears. The gap between a pop star’s public and private politics can be as deceiving as anything.

This is the lesson the singer Morrissey is battling, once again. He has had a number of his collaborators on a new album distance themselves from the quintessentially English singer because of his right-wing politics and racist remarks. According to The Guardian, his formal and most recent political charges were support for Nigel Farage, Anne Marie Waters, and Tommy Robinson; criticism that London’s Muslim mayor Sadiq Khan “cannot talk properly”; and calling the Chinese “a subspecies.”

Given how beloved Morrissey and his former band the Smiths were, his Athenian-style exile is remarkable. But are Morrissey’s right-wing attitudes really a new development, or were they there all along?

As England’s singing James Dean but with a biting tongue and “Wilde on his side,” Morrissey’s left-wing bona fides were once what one might expect. He had the controversial 1988 tune “Margaret on the Guillotine,” about killing the Tory prime minister. In 2004, while interrupting his own concert to announce the death of Ronald Reagan, the stage banter included wishing it had been George W. Bush who had died that night instead. That same year he released a song called “I Have Forgiven Jesus.” All of which is to say: Morrissey is perhaps not your poster boy for mainstream conservatism—but at the same time it doesn’t mean he was, as they say, “a nice liberal.”

The signs were there from the outset with Moz. His 1991 “Journalists Who Lie” is practically a Trump tweet about fake news set to song. Morrissey had a penchant for nationalism, racism, and right-wing politics going back at least to the late ’80s. In a 1992 interview with Q magazine he articulated some of these views:

“Fifty years ago the most conservative country-music star would appear to be a hippie communist today.”

Morrissey had taken controversy to new heights a few years earlier with “Bengali in Platforms,” a song where the narrator (not to always be confused with the artist himself) tells the Bengali:

Morrissey was traditionally English, irascible and insular. Some would even say xenophobic. Not unlike G.K. Chesterton, who said, “I have never managed to lose my old conviction that travel narrows the mind.” Or Philip Larkin: “Foreign poetry? No!”

Morrissey’s predecessor in the rock realm, the glamorous English rock star with far-right politics and invincible self-belief that he was the überman, was his childhood hero, David Bowie. Like Bowie, Moz never made any sincere suggestion that men are equals. In 1971 Bowie sang: “Let me make it plain/You gotta make way for the Homo superior.”

Bowie’s rightist talk could be explicit:

I wouldn’t mind being the first English president of the United States either. I’m certainly right-wing enough.

Oh he was a terrible military strategist, the world’s worst, but his overall objective was very good, and he was a marvelous morale booster. I mean, he was a perfect figurehead.

The thunderbolt painted on Bowie’s face for the cover of Aladdin Sane appears inspired by the British Fascist Union’s logo (according to Bowie’s manager Kenneth Pitt, Bowie’s mother, liking “its look,” had a uniform in her closet), which, in turn, derived from the Schutzstaffel, or SS, logo. (This means that every millennial who dons the painted Bowie/Lady Gaga thunderbolt on their face is, in a sense, sporting a Nazi-derived symbol!)

But fans of David Bowie, like fans of Morrissey, didn’t want to believe what was obvious, and so they obscured it from themselves. Bowie’s interest in Nazism is apparently excused on account of cocaine abuse (although drugs causing racist fits didn’t work as an excuse for Roseanne Barr), or it was, as they say, a “flirtation with fascism,” and they bought Bowie’s statement a few years later, after his actions had nearly derailed his career and had inspired the Rock Against Racism concerts, that he was “apolitical.”

The liberal press assumes that anyone who is smart or creative is left-wing, so when a smarty or any artist they enjoy has politics that seem right-wing, they’re liable to get confused and call it “Strange.”

Morrissey and Bowie aside, ’70s rock stars, especially in the glam-rock genre, such as Alice Cooper and Bryan Ferry, were righties. If your act is nostalgic for the Weimar Republic then there’s a certain logic in exploring the following decade in German history.

In 1976 Eric Clapton addressed his concert crowd with a spiel about how England had “become overcrowded” and that they should vote for Enoch Powell to stop Britain from turning into “a black colony.” He also told the audience that Britain should “get the foreigners out, get the wogs out, get the coons out,” and then he repeatedly shouted the National Front slogan “Keep Britain White.” “White Room” and Cream, for Eric, indeed.

In 1970, Rod Stewart was also #TeamEnoch: “I think Enoch [Powell] is the man. I’m all for him. This country is overcrowded. The immigrants should be sent home. That’s it.” It should surprise no one that Rod considers President Trump a “dear friend.”

Then there’s Roger Daltrey of the Who: “You need someone who’s gonna make people jump. You need a Hitler figure to just say, ‘This is what it is.’ And Hitler was right for Germany at the time, they were really being s— on. He turned out mad at the end, but when he started, he was there, he just did marvelous things for the German people. You just need a Hitler figure, internationally, for kids.”

On the lighter side, there’s Ian Curtis of Joy Division voting Conservative and Sex Pistol John Lydon wearing a MAGA shirt. Mick Jagger and Madonna caused fans to gnash their teeth when they praised and defended Thatcher (although that’s just Madonna pretending to be British again). John Lennon was even coming around before he died. Ironically, the Beatles had weighed in on Enoch Powell earlier with the satire “No Pakistanis.”

And because it’s too boring, I won’t even get into Simon and Garfunkel’s neoconservatism. Sometimes the crypto-conservative isn’t so crypto, and the song is right there in front of us.

But take it all with a grain of salt: As society drifts leftward, staying the same makes you comparatively right. Fifty years ago the most conservative country-music star would appear to be a hippie communist today. It’s all relative. Most pop stars are not Mises or Russell Kirk; they just might think the left-wing line is stupid, or insane, or simply misguided and wrong. Or maybe they’re just selfish celebrities with enough personal wealth that they can afford to say what they really think sometimes. Not unlike Donald Trump.

I imagine Morrissey wishes he had heeded Mick Jagger’s advice about pop and politics from an interview in 1969, as found in Peter Doggett’s There’s a Riot Going On:

To confirm her conclusions, Mick Jagger had just given an interview to the London-based magazine ‘Student.’ Was Jagger interested in politics? “No.” Why not? “Because I kind of thought about it for a long time and decided. I haven’t got time to do that and understand other things. I mean, if you get really involved with politics, you get f—ed up.”