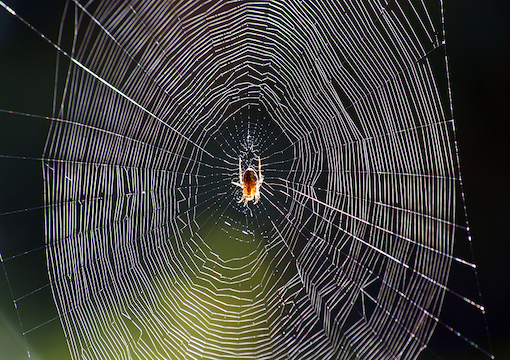 Between a hollyhock and a lavender in my garden is suspended a spider’s web. There is a part in which the prey is caught, and another part, a funnel, in which the spider waits like a paparazzo awaiting the appearance of a celebrity emerging from a night spent with a person who is not his or her spouse—which, for some reason, is a matter of intense interest to thousands or millions of people who know neither the betrayer nor the betrayed.

But to return to the spider, Agelina labyrinthica to be precise. I watched it the other day when a very small insect (which I was unable to identify) got caught up in the web. Out rushed the spider, a female, and clasped the struggling creature and injected it with poison, retreating an inch or so afterward. The little insect struggled, kicked its tiny legs pitiably. Then the spider rushed forward again to give it a second dose, once again retiring a little way, as if to contemplate its handiwork. When the insect’s struggles were reduced to manageable proportions, as they soon were, the spider rushed forward, grabbed it, and reversed at high speed into the funnel part of its web, as if to enjoy an illicit pleasure unobserved.

It is curious how, in these circumstances, one anthropomorphizes even the arthropods. I saw in this little scene a poor, innocent, suffering victim and a vile, merciless, evil predator. I still have firmly in my mind’s eye the vision of the little insect’s kicking legs, in its futile efforts to save its life to which, insignificant as it was, it behaved as if it was attached. My sympathies were immediately engaged, and I even thought of trying to rescue it. It was, as it were, the underbug in the conflict.

I could not but feel outrage at the spider’s behavior. Though I like insects, at least in their adult forms and apart from cockroaches and wasps, I don’t like spiders. I am not sure how or why this difference in attitude arose: Why should the extra pair of legs cause me to shudder, as it does? As Pascal put it, the heart has its reasons that reason knows not of.

“It is curious how, in these circumstances, one anthropomorphizes even the arthropods.”

Anyway, the scene confirmed my worst thoughts about spiders. They are sneaky creatures; I hoped that one day this particular example of its species would meet a fate fairly common to it, namely matriphagy, being eaten by its own offspring. Serve it jolly well right!

Of course, I knew that it was absurd to attribute moral qualities to such lowly creatures as an insect and a spider, but in fact I think it is something that we all do. No one fails to attribute malignity to a rattlesnake or crocodile, though they are no more moral agents than are the arthropods. Even firm evolutionists invest the natural world with moral meaning. In his foreword to Richard Dawkins’ The Selfish Gene, the brilliant evolutionary theorist Robert Trivers wrote that the behavior of the social insects proves that there is no biological basis for differing roles for men and women. Proverbs should be rewritten:

Go to the ant, thou male chauvinist pig, consider her ways and be wise…

Notwithstanding the vile conduct of the spider, it must be admitted by all open-minded observers that the contrivances by which it obtains its livelihood are admirable. How is it that a creature of such little formal intelligence and education, and so small a brain by comparison with our own, is able, for example, to construct the funnel web in which it lies in wait so patiently, to say nothing of its ability, according to naturalists, to detect its prey even before its entanglement in the other part of the web, being ultrasensitive to the effect of the vibrations in the air on that part of the web’s fibers as the prey approaches? Its eyesight, too, is remarkable; your shadow will cause it to retreat more deeply into its funnel.

The answer is clear: It was evolution, working through the principle of survival of the fittest, that did it. Let us just take the construction of the funnel among the spider’s abilities. Each successive generation of spider had a genetic mutation among some of its multifarious offspring that allowed those with this mutation to construct a slightly improved version of the tunnel, improved in the sense that it conduced to greater chances of survival. After thousands or millions of generations of Ur-spiders, Agelina labyrinthica finally emerged to construct its web between my hollyhock and my lavender. And this goes for all the other creatures in my garden.

I am not entirely convinced that some minor change in the way a labyrinthine web is constructed would be translated into a statistically discernible improvement in spider-survival; but let that pass. It might be so because of the many billions of individuals in the spider population, such that there is an immense population to experiment on. Or perhaps some mutation allowed a spider to go from building no funnel web at all straight to building a perfect funnel web such as exists now. But at any rate, we know that the funnel-web spider was fit to survive because it did survive, and we know that it survived because it was fit to survive. This seems to me to be dangerously circular, a pseudo-explanation.

But what is the alternative explanation? That some force, divine or otherwise, created the funnel spider from a blueprint? This seems to me absurd. Who would decide that what the universe really needed for its completion was a funnel spider, let alone any or all of the other millions of arthropod species on earth?

The puzzle is too great for my small brain. But I have observed a very strange change in the population of lizards on my terrace recently. Three years ago a melanotic variety suddenly appeared and now about a third of the lizards are jet black. I can see no evolutionary pressure that might have brought this about. Perhaps there is an unseen advantage for lizards in being black.