A U-Turn Through the Past 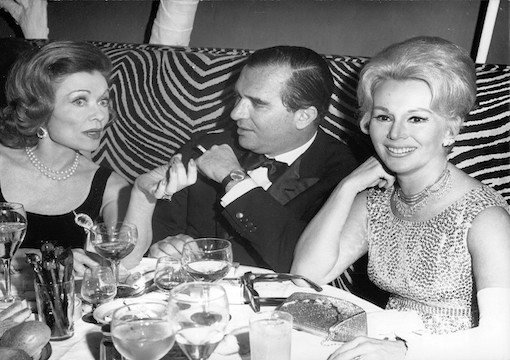 I find myself detached from mainstream culture. It started with the demise of nightclubs like Annabel’s, and the people that frequent them with names like Lil Nas X, Dua Lipa, Lizzo, Fat Joe, Pusha T, DaBaby, and others of their ilk. All real names, incidentally, lifted from saccharine, slush-like descriptions by gossip columnists of nightclubbing celebrities. Yep, things sure ain’t what they used to be—after dark, that is. Forget top hats and tails, or older men leering at figure-eight gals dressed in clingy gowns; this is the #MeToo era and men are almost redundant. The blatant extravagance and at times arrogance that came with inherited money are over. Silly, empty-headed dowagers are a thing of the past. Women nowadays go into nightclubs with support teams of yes-men and yes-women. Clubs are dark places with more security than customers and with the charm of a root canal. There is only one place in all of Europe that I go to after dark, Robin Birley’s 5 Hertford Street.

For me it all began with the frenetic Gotham of the postwar period of the ’50s. El Morocco was full of playboys who were suavely but ruthlessly predatory. All we did was chase women. Hollywood types were considered riffraff, Middle Easterners untrustworthy and too slick, South Americans too greasy; even Europeans were seen as too sardonic and always looking for funds. I loved every minute of it, and even today I do not consider it a waste. Where the rich set once partied and occasionally went slumming, today’s celebrity rich slum all the time, their hangers-on, wannabes, scene-makers, and stargazers personifying skid row. Mind you, in a way the end of elegance after dark is a godsend. Otherwise I’d be out every night still making a fool of myself at an age where I should be home watching the telly.

“For me it all began with the frenetic Gotham of the postwar period of the ’50s.”

Growing up when I did, and believing in the genteel romantic ideals that pervaded the culture at the time, the nightclub was the place where one tested one’s mettle. Money, believe it or not, meant nothing, although it got one a good table most of the time. Manners and breeding came before it, and tainted fortunes that resulted in social status and power were seen as a crime long after the original transgression. Or so we believed. I remember reading The Great Gatsby while still in school and then rereading it while clubbing and doing nothing else. Gatsby’s shame was that he was impressed by Tom Buchanan’s old money and ashamed of his own bootlegging, my thoughts at the time. But Buchanan’s old money meant nothing because he was a coarse bully, whereas Gatsby’s illegal fortune had made him a gentleman. See what I mean when I say manners came even before breeding? What defeated poor Gatsby at the end was his embarrassment before social power. I then reread Tender Is the Night and headed for France and the Riviera, where Dick Diver stood tall. That was the book that broke Scott Fitzgerald’s heart, someone once remarked, yet compared it with a Keats poem. Rosemary Hoyt and Nicole Diver were two of the most perfect women a young Taki had ever read about. I searched for Dick, Rosemary, and Nicole for years, and although I never found them, I learned a lot while looking for them. Fitzgerald explored the ambiguous relationship between great wealth and genteel values in Tender, just as I was doing while invited to move into La Leopolda, the great Agnelli-owned villa in Villefranche.

Well, the ’60s changed things. The ruling elite—the Agnellis, the Thyssens, the Rothschilds, and so on—remained at the top but discovered discretion. Their lifestyle was unchanged, but fear of the mob had become the order of the day. Slowly but surely grand balls in grand houses went the way of high button shoes. Just as slowly but surely, the freaks began to take over. The Russians arrived and ordered boats as big as their manners were bad. Even worse, the Saudis began to come north for hookers, horses, and houses. Although time had stood still for me at the turn of the century, it accelerated after the 2016 referendum and Trump’s victory. Getting involved became important once again. Last week I went to Hertford Street where Robin Birley, Lord Howard, and Andrew Roberts threw a bash to celebrate Boris’ victory. Due to my advanced age I was given a great seat next to Zac Goldsmith, newly ennobled, and Douglas Murray, who stage-whispered that the lady talking to Charles Moore and whom I couldn’t take my eyes off was a baroness. Andrew Roberts gave a speech that would befit Henry V after Agincourt, and I was touched by Robin’s tribute to the man who started it all, Jimmy Goldsmith, back in 1997. More good news followed: I am engaged, at least I think I am, to marry Simone Finn, the baroness, who reminds me of my wife. And after a great costume party the following night—my host asked me for discretion—being well oiled, I was given a ride home by a friendly married couple whose driver overshot my front door by no more than ten yards at most. “Please do a U-ee,” ordered the lady. “For God’s sake, Eugenie,” said her husband sitting up front. “He never would have made it,” said Princess Radziwill, which I thought was rather rude.