A World Empty of Moral Meaning 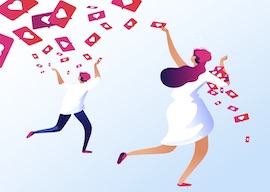 A friend who is a doctor told me—and therefore it must be true—that a well-known social media site has decided that from now on it will not publish how many people “liked” what people had posted on it because some posts attracted many more “likes” than others, thereby wounding the self-esteem of those whose posts were not much “liked.” From now on, the only person to know how many “likes” his post attracts will be the person who posted it. He will not be able to compare himself with others and will therefore be able to continue to think well of himself.

There is evidently no plumbing the shallows of the modern soul. But even as a means of bolstering self-esteem, in the way that low interest rates supposedly bolster our economies, not publishing how many “likes” posts attract seems unlikely to me to be very effective. People have eaten of the fruit of the Tree of Knowledge; they already know how many “likes” a post can gather, and will therefore still be able to estimate their own relative “popularity.” But that anyone should care for such a popularity in the first place fills me with a kind of numb despair.

In any case, self-esteem is not a quality that should be encouraged. On the contrary, there are few personal qualities that are more despicable. In a sensible world, anyone found guilty of self-esteem would be severely punished until such time as he had lost it so completely that he now had none.

A lack of self-esteem can be blamed for almost any human failing, from arrogance to self-effacement, from exaggerated risk-taking to cowardice, from drug-taking to puritanism. No patient ever complained to me that he had too much self-esteem and requested a treatment by which it might be reduced, though it is obvious that any self-esteem at all is too much; but many patients claimed that their problem was lack of self-esteem. What they usually meant by this was that they continued on the same self-destructive path despite their knowledge that it was self-destructive. They were complaining not of lack of self-esteem, as they thought they were, but of lack of courage.

“No patient ever complained to me that he had too much self-esteem and requested a treatment by which it might be reduced.”

Self-esteem is a psychological, or pseudo-psychological, concept or characteristic; courage is a moral one. People much prefer to think that they are psychologically deficient rather than morally deficient; among other benefits, psychological deficiency turns their problem into a technical one that someone else should have the means to solve.

And yet, at the same time, most people who say that they lack self-esteem know that they are deceiving themselves if not others, that they are playing a part rather than telling the truth. When I replied to those who complained of a lack of self-esteem as the source of all their troubles that at least they had one thing right, namely their low self-esteem, they were not angry, as one might have expected had they truly believed what they were saying, but instead they laughed, as if caught out in a silly practical joke. Yet they had come in the hope of having self-esteem pinned on their chests like a medal, after which their problems would dissolve of themselves, requiring no moral quality such as courage for their solution.

But where does courage come from? It comes from the decision to exercise it and to take the consequences of having exercised it. It is true, of course, that many people have been constantly denigrated in their lives, told repeatedly that they cannot do this or that, and so forth, and seem to have absorbed the message; they behave as human doormats. But it is still courage that they need, not self-esteem, for the latter is a quality that is believed to be deserved irrespective of what a person does, almost as a human right. It is like the right to have an opinion irrespective of whether one knows anything about the subject on which it is an opinion, rather that the right to have an opinion on that subject because one has studied it and knows a great deal about it. Freedom of speech is a human right, but an opinion based upon knowledge is a locus standi.

People do not need Freud or any of his myriad offshoots (psychotherapy as an activity reminds me of the Hydra, the organism that we studied in biology that reproduced by budding rather than by sexual means), but Socrates.

I recall a patient who had made herself her husband’s doormat—through lack of self-esteem, she said. She was very unhappy in this role but claimed that she could do nothing about it. She was completely dominated by him. As soon as he came home from work, she had to wait on him hand and foot. He claimed to be unable—literally unable—to do anything for himself. He claimed to be illiterate. He even made her dial for him when he wanted to use the telephone, saying that he did not know how to use it. She behaved as if his claimed incapacity were real.

She described quite a responsible job. He had about twenty people working under him.

“And do you think that he could do such a job, or ever have been appointed to it, without being able to use the telephone for himself?”

Strangely enough, this rather elementary question seems not to have entered her mind. Having come into my room crying, she now laughed. It was absurd, all that she had told herself! But now she was faced with a real dilemma, either to accept her situation or do something about it. The former she could not do, the latter required the courage that until then she had not exercised. It was a painful choice, but at least it was a real one. No more talk of self-esteem.

Self-esteem is one of those psychological concepts by which we empty the world of moral meaning, hoping for a technical solution to our discontents. That world empty of moral meaning is the world in which the number of “likes” is the measure of all things.