A Black Gift for Politics? 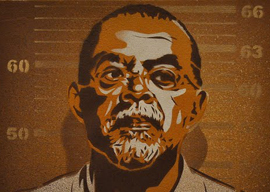 In Seth Forman’s book American Obsession: Race and Conflict in the Age of Obama, there’s a section about the 2009 incident in Cambridge, Massachusetts, when major-league professional black guy Henry Louis Gates was arrested trying to break into his own house.

At the time of [Gates’s] arrest, the city of Cambridge had a black mayor and was located in a state with a black governor with a black president.

That brought to mind a thing I’ve often found myself thinking: Blacks may be natural politicians.

Cambridge is, after all, only 8.7 percent black. Massachusetts is less black than that: 6.6 percent. The USA is 12.6 percent black. Mayor Simmons, Governor Patrick, and President Obama are clearly successful politicians.

Politics is a line of work like any other, and to be successful in it, you need certain skills, aptitudes, and personality characteristics—certain gifts. You need to occupy a particular region in the many-dimensional space of what psychologists call the ABC clusters of traits: Affect, Behavior, and Cognition.

“There are natural politicians in any population, but are there more in those descended from sub-Saharan Africans?”

Is that region of psycho-space “blacker” than others? There are natural politicians in any population, but are there more in those descended from sub-Saharan Africans?

[Here I have to insert a public service announcement, some sort of boilerplate, like those legal disclaimers you get at the end of corporate emails. I have to say what has been blindingly obvious to every one of us since we were in pre-K, but which, for some reason I don’t understand, you have to say explicitly when discussing this topic.

Here goes: In any human population of more than a few tens of thousands, most traits, including those ABC traits, exhibit variation. Some members of the population are taller, some shorter; some are thinner, some fatter; some are more susceptible to diabetes, some less susceptible; some are outgoing, some are introverted; and so on.

Nothing could be more obvious to anyone who has mixed with his fellow human beings at all, but if you don’t spell this out, people get angry with you.

If you then add this other obvious thing—that none of the foregoing excludes the possibility of intrinsic and intractable differences in the statistics (averages and such) of different populations—people get mad at you, anyway.