A Blind Spot Full of Billionaires 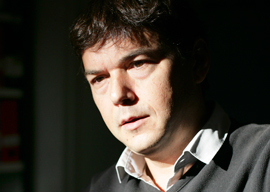 One of the surprises in Thomas Piketty’s best seller Capital in the Twenty-First Century is how grating the Frenchman’s prose style turns out to be.

Granted, Piketty has valid reasons for being perpetually outraged at his fellow economists” ignorance and cupidity. In this post-1968 era in which the left has lost interest in the working class, the rich are getting richer a lot faster than anybody else is. But most economists haven”t been in a hurry to talk about this; after all, they primarily get paid by the wealthy. As Adam Smith might say today, “It is not from the benevolence of the economist, the econometrician, or the expert that we expect our rationalizations, but from their regard to their own interest.”

On rare occasions we see an economist using his awareness of the law of supply and demand to point out that, say, “immigration reform” is actually a cheap labor policy benefiting the upper class.

But when the better-known economist Tyler Cowen of the Mercatus Center and the New York Times got around to discussing “What do I think of David Brat?,” he quickly changed the subject to how Brat violated the new World War T protocol against referring to a transsexual by both before and after first names.

So Piketty’s peevishness is hardly unreasonable. But across 685 pages his irritability and arrogance start to sound like a 2002 Jonah Goldberg parody of Gallic intellectual stridency (perhaps mixed with Teutonic pedantry). To pick an example at random, on p. 85 Piketty dismisses some dubious bit of Information Age hype with his characteristic overkill:

“The plain fact is that this argument is often used to justify extreme inequalities and to defend the privileges of the winners without much consideration for the losers, much less for the facts, and without any real effort to verify whether this convenient principle can actually explain the changes we observe. I will come back to this point.”

You will, Thomas, indeed you will.

The rare occasions when Piketty attempts to sound modest are comic in their insincerity and didacticism:

“To be frank, I know virtually nothing about exactly how Carlos Slim or Bill Gates became rich, and I am quite incapable of assessing their relative merits. Nevertheless, it seems to me that Bill Gates also profited from a virtual monopoly on operating systems …”

(By the way, Piketty appears to believe that Slim, who is the second largest shareholder of the New York Times, is a victim of “Western ethnocentrism.”)

At first I assumed that the problem with Piketty’s prose was the fault of his hard-pressed translator: rendering anything into English quickly is a challenge. Four decades ago, for instance, the first U.S. releases of Solzhenitsyn’s books tended to be fairly dire due to an understandable haste, but eventually superior British translations would filter into the American market and repair a bit of the damage that had been done to the great Russian’s literary reputation.

Yet Piketty’s translator, Arthur Goldhammer, one of only two or three dozen full-time book translators left in America, is a distinguished stylist. He has four times won the French-American Foundation’s annual prize for nonfiction translation, such as for his acclaimed Library of America edition of de Tocqueville’s Democracy in America. So if Piketty sounds like a guy who can”t come to bed because someone is wrong on the Internet, well, that’s probably how he wants to come across.

And it seems to be working for him. It’s an ironic illustration of the winner-take-all tendency of modern moneymaking that Piketty is currently monopolizing the market for left-of-center economists almost as thoroughly as Bill Gates monopolized operating systems back in the 1980s.