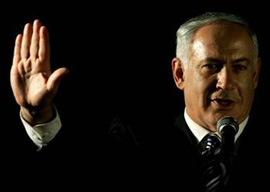 After soul-shredding millennia of bloodshed and insane sectarian conflict, a small candle of hope finally flickers in the Middle East. That candle’s name is Binyamin Netanyahu, a man who may finally bring the world together. Across every latitude and spanning every longitude, hopping from continent to continent while straddling the equator as if riding a giant invisible mechanical bull, the peoples of this planet are united in disliking him. We may not agree about religion or politics, but we can all hold hands and agree that he’s more than a bit of a jerkoff.

Perhaps that’s overstating things by a wee morsel. To be fair, there are still hardcore Zionists who think he’s the bee’s knees. There are also hordes of blinkered American Christian Goyim who’ve been mind-tooled into venerating a religion/ethnicity/political system that places zero value on Christians and all other Goyim—but beyond that, the world has closed ranks and simply can’t stand this arrogant, obstinate, belligerent, charmless, sweaty, green-skinned, liver-spotted creep.

Oh, wait—there’s Congress, too. Anyone who witnessed the Nuremberg Rally-level tongue bath Netanyahu received from the eager pink tongues of both Republicans and Democrats as His Holy Schmuckiness graced them with his presence earlier this year—they kept leaping to their feet and roaring their approval almost as if he owned them—would know that Congress thinks he’s sweeter than apples dipped in honey on Rosh Hashanah.

“We may not agree about religion or politics, but we can all hold hands and agree that he’s more than a bit of a jerkoff.”

But beyond those special-interest groups, yeah—we think he’s a putz, a schmendrick, a schmuck, a schlub, a nudnik, and a schlemiel. If you prefer, he’s a stooge, a cretin, a chump, a dipstick, and a goon. We care neither for him nor for those Deputy Dawg jowls of his. As far as we’re concerned, he can go pound matzo balls up his ass.

Although the Cold War terrorized minds for decades with its potential to blow up the planet, it failed. But this lone rogue stubborn fanatical douchebag whom his few friends call “Bibi” may finally get the job done. His public speeches are splattered with the word “evil,” and just as Nietzsche counseled us to beware of those in whom the urge to punish is strong, we should be extra-wary of a nuclear-armed politician who liberally uses the word “evil.” Especially if said politician won’t admit he owns nuclear weapons. Extra-super-especially if he’s making loud noises about attacking another nation because he suspects that they think that they might possibly want to build nuclear weapons themselves at some undetermined point in the future.

At the opening of a—how to put this?— long-delayed Auschwitz blueprint exhibit last year, Bibi again used the word “evil,” this time in reference to Iran and its evil campaign to evilly exterminate Israel from the map in the evilest manner possible. (Just don’t hold your breath waiting for him to trot out the blueprints for Israel’s nuclear-weapons facilities anytime soon. Apparently those aren’t quite as evil.)

Netanyahu has made a career of fanning the flames of fear about “terrorism,” which he has described in theory as “intrinsically evil, necessarily evil, and wholly evil” but which he appears to define in practice as “anything that stands in the way of Israel acting like a bunch of pushy, entitled, anointed, supremely arrogant noodges.” But he’s firing blanks, seeing as how Israel was itself founded on terrorist bombings, murder, and a decidedly undemocratic forced purge of despised ethno-religious “others.”