A Brief History of the Redneck 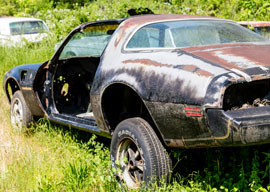 KANSAS CITY, Mo.”Last week, when I outed myself as an Angry White Man, I got some of that dreaded “nativist” fan mail. (Is it my imagination or has the word “nativist” been used more times in the past two months than in all previous recorded history?)

Let me make this clear: I”m not a nativist, I”m a redneck. There’s a difference. A nativist would be one of those snooty New Englanders in the Mayflower Society. Blue bloods in ruffled shirts. Think Adlai Stevenson…Noah Webster…William Rehnquist. Congregationalists. Pointy-nosed moralizers. Some of them could be angry”Jonathan Edwards comes to mind”but they were angry in a sort of clench-jawed Connecticut debutante way. Ewwwww, don”t talk to her, she’s such a Kappa.

The nativist idea of a rebellion is to dress up like Indians and dump tea in the ocean”the 18th-century version of frat boys pranking the archrival football team.

The redneck idea of a rebellion is to lie in wait with a shotgun for the guy who’s trying to tax your whiskey.

Now. Most of you have no idea what I”m talking about when I say Presbyterian. You”re thinking it’s the plain-vanilla church on the town square run by a pasty-faced pastor named Morrison who speaks twice a week on the virtues of thrift and charity. But I”m not talking about 21st-century namby-pamby Presbyterians.

The ones in Tennessee and Texas and that southern part of Ohio that’s in Appalachia.

These are the original rednecks. These are not people who left their cross-timbered homes in South Yorkshire after deciding the Anglican Church was becoming “a bit too Catholic, yes, a bloody shame.” These were people who felt like most churches were a con game. These people hated all the churches. These were people who wanted to be left the hell alone. These are our Angry White Man forebears.

A little history is in order:

The first recorded use of the word “redneck” was in 1830, and it was a sneering remark by our nation’s first female reporter, Anne Royall, who was kind of a bitchy would-be aristocrat, even though she was somewhat of a redneck herself. She had been a house servant for a rich landowner in Sweet Springs, Virginia”what is now West Virginia, middle of nowhere”and she started sleeping with her boss and eventually got him to marry her. He was much older, so when he died, the family made sure she didn”t get any of his money. She then spent the rest of her life (a) trying to get his Revolutionary War pension, and (b) writing travel journals about how uncouth everyone is in the South. So in 1830 she’s in Fayetteville, North Carolina, and she wants to get across how ignorant and worthless the Presbyterians are, and so she calls “em rednecks.

“America was the first place in the world that could appreciate a redneck.”

Now. Why would their necks be red? And why would Presbyterian necks be redder than anyone else?

To understand why, you need to pull out your map of the British Isles in the year 1700.

Ready? I call your attention to that part of Ireland called Ulster. Not Northern Ireland. Ulster. It’s not the same thing. Notice that it looks like one of those maps of Antarctica or Saudi Arabia that used to say “Unknown Region” or “Empty Quarter.” This is the part of Ireland that was so wild it had no real boundaries for centuries. It was just “that part up north where everything is out of control.”

So what do we know about the Ulster area of Ireland?

It’s full of pissed off people who own incendiary devices.

Okay, don”t put away the map yet.

Now draw a straight line from Belfast, across the Irish Sea, north of the Isle of Man, to that deep indentation in the British mainland where it looks like some snaggletoothed monster took a giant bite out of the coastline.

That’s where the border between Scotland and England is, and we Angry White Men are also from here. Some of us are Scottish, some of us are English, but all of us are what is known as Lowlanders or border people.

What do we know about Lowlanders? Well, we know that they lived on the border of two countries that hated each other for most of their history, so what does that tell us?

They”re also pissed off, they own firearms, and they like to fight.

And they play fiddles and clog-dance.

But the main thing we know about people from both these areas, Ulster and the Lowland Borders, is that their skin is white.

Their skin is very white.

Their skin is so white they can go to a beach in northern Sweden and they”ll sunburn.

And so when people from these areas work in the sun, their necks don”t tan, they just break out in red rashes like somebody threw measles cooties all over “em.

But that still doesn”t explain why the word “redneck” was considered a putdown.

And that’s all about being Presbyterian.

The first redneck in history is John Knox.

Founder of the Presbyterian Church. Hell-raiser.

Such a badass that, every time he would talk to Mary Queen of Scots, he would make her cry.

I won”t go into his whole history, but just a few of the redneck bona fides of John Knox:

From a small town. (Haddington, in Scotland.)

Always hiding out from the law.

Constantly in and out of jail.

Kicked out of the country twice.

Full of wild ideas that made sense only to him, but he would wallop your ass if you challenged him.

Thought the Pope was ridiculous.

Thought the English and Scottish monarchs were ridiculous.

Thought the Archbishop of Canterbury was beyond ridiculous.

Believed in the death penalty for all felonies.

Fought in a war on the rebel side.

Involved in at least one riot.

Had a Duck Dynasty beard.

And if there’s any doubt he was a redneck…

Took a 17-year-old bride when he was 50 and got her pregnant five times.

He would feel totally at home today in Bogalusa.

Who thought John Knox was cool? The Lowlanders. People who were tired of getting pushed around. People who never got any respect. People who didn”t go to school. Farmers. Brawlers. People who had eight children and wished they could have a bigger family. People who were always refusing to do what the king said. They liked John Knox because he said you didn”t have to read and write to know what God was saying. Besides, if the kings and queens and archbishops all hated him, he automatically qualified as a cool dude.

Now, pay attention, this part is complicated, and I don”t want any letters from aggrieved kilt-wearing gangstas:

John Knox is over in Edinburgh being a troublemaker. The English don”t like him. The Pope doesn”t like him. The Archbishop of Canterbury hates him so much he’s trying to bring him up on charges. The Scottish queen thinks he’s horrid because he refuses to bless her marriage.

But he has all these uneducated scum-of-the-earth followers in the Lowlands, and they”re even harder to control after Knox’s death in 1572 because now you can”t summon the ringleader to the palace and threaten him with prison.

Meanwhile, at the end of the 16th century, Queen Elizabeth is enforcing her presence in Ireland, trying to get rid of the Irish chieftains. She’s constantly fighting with them. And she gets rid of almost all of them.

But the last holdout of the Irish badasses is the Catholic land barons in”of course”Ulster.

These are the equivalent of Catholic serial killers.

She never does conquer Ulster. It takes England till 1607 to finally get rid of all the Irish chieftains in the north, and the ones who are still alive flee to France so they can be Catholic and plot their comeback.

Elizabeth has died by then, and so we have King James managing this mess. You know he doesn”t like Catholics because he translated that Bible that the Catholics hate to this day.

So King James says, “You know what? Let’s kill two birds with one stone. Take all these John Knox followers in the borders and send “em over to Ulster to take over the land we just seized from the Irish chieftains.”

So he basically rounds up the Presbyterians”the farmers, the Lowlanders”and he ships “em over to Ulster, gives “em all the Catholic land, and creates what we now know as…

Some people say Scotch-Irish, but it’s really Scots-Irish. Scotch is a whiskey.

Scots-Irish is a term that is unknown in England or Scotland. My grandmother used it all the time, saying that was our heritage, we were Scots-Irish, and I would say, “Grandma, it’s two different places, it’s either one or the other, Scots or Irish.”

It was years later that I learned why it’s called that. It was Scottish people living in Ireland. Some of them did intermarry with the Irish Catholics, thereby creating some hybrid DNA, but for the most part we”re talking about Lowland Scots surrounded by angry Irish who hate their guts. Plus a few English from the area right there on the west coast of Britain”don”t put up the map yet”called Cumberland. The Cumberland people were fiercely independent, and it was not a good time to be fiercely independent, so they were lumped in with the dyspeptic Scots.

By the way, when Southerners go over to Scotland to return to their roots and buy sweaters, they always go to the wrong place. They go up to the Highlands and watch the bagpipe parades and look for the Loch Ness Monster, when they should be going down to picturesque Carlisle, in the Lowlands, largest city in Cumberland. Carlisle is about as exciting as downtown Akron on a rainy Tuesday morning. Carlisle is actually not even in Scotland. It’s in northern England.

So, if there’s such a thing as an English hillbilly, all of “em are in Cumberland.

Hillbilly, by the way, is a term that wasn”t coined until 1891. All hillbillies are rednecks, but not all rednecks are hillbillies.

There’s gonna be a test on this later, I hope you”re taking notes.

Okay, here’s my point. All these Presbyterian farmers are sent over to Ulster to colonize it”and they don”t like it there any better than they liked it in the Lowlands. For a simple reason: The Catholics are always trying to kill “em. They”re fighting over the land all the time.

So where do they go?

Welcome to Appalachia. America was the first place in the world that could appreciate a redneck.