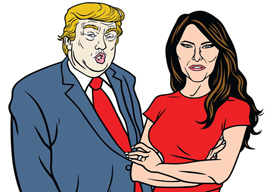 I never want to belong to any club that would have anyone else as a member.

Groucho’s original complaint is incontestably clever, but when it comes to going almost anywhere, from the movies to Mass, other people are the problem, surely? (On the latter front, in the interest of accuracy, the Vatican should at least rename the “sign of peace” the “kiss of death”; may the genius who cooked up that particular rubric spend eternity shaking hands with sulfuric demons…)

And so, with the election of Donald Trump, I find myself once again involuntarily in league with the lumpen.

Yes, as I”ve said, I”m relieved he defeated Hillary, enjoying the effect his victory is having on sundry deserving slimeballs, and anticipating a spectacularly gaudy and even goose-pimply inauguration, not to mention the innumerable White House galas to come.

(On that front, I so wish Ivana were still Mrs. Trump. There’s no way she would have tone-deafly chosen “cyberbullying“ as her obligatory First Lady crusade, for one thing. More like “Pomeranian rescue” or “cocktail ring appreciation.”)

“With the election of Donald Trump, I find myself once again involuntarily in league with the lumpen.”

(That cavil aside, who can deny that Trump’s, well, Kennedy-esque family is part of his appeal? By far the greatest election reaction video came from a pants-wettingly enthusiastic Egyptian TV host, who swooned over the photogenic “sweeties of the White House” striding across the stage at the victory party. (Meanwhile, “the Muslim Brotherhood members in Egypt,” he continued breathlessly, just “bought up all the anti-diarrhea drugs in the country…”)

Weeks later, Trump’s triumph still seems slightly unreal; I permitted myself to purchase Time magazine’s special commemorative issue”can you imagine how much it pained them to put that out?”to serve as cerebral smelling salts and snap me out of those sporadic “Holy shit, he’s the president!” flashes.

But that lapse aside, I put not my trust in princes.

Of course, not everyone shares my horror of personality cults, or the man never would have won. Twitter’s upstart counterpart Gab, for example, is overrun by Trump cheerleaders, for whom fun memes like that “Deplorables” Photoshop or “Donald Crossing the Delaware“ aren”t just a split second’s amusement, but the bunting of a burgeoning civic religion.

At least so far, Tea Party tropes like tricorne hats appear to be permanently passÃ©, thank goodness. But can anyone doubt, given Trump’s famous personal aesthetic, that a kitsch front is steadily approaching? It will soon be hard to tell the left-wing parodies from the genuine right-wing article. (I can”t wait to see Jon McNaughton’s first postelection painting, can you…?)

But more troubling is the rhetorical kitsch being wielded against any criticism not only of Trump himself, but of his less appealing supporters.

In the wake of last weekend’s National Policy Institute gathering, I found myself on Facebook having to explain and defend my (I thought) pretty much noncontroversial assertion that “Making Nazi salutes is dumb.”

Otherwise-intelligent people piled on with the worst kind of pedantry about arm raisings of the “Roman” and “Bellamy“ varieties. What next? “The swastika is actually a Hindu good-luck symbol”?