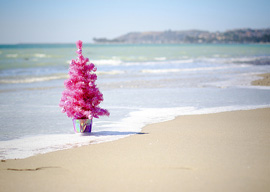 Here in the LA area, as in the rest of California and across the globe, the secular Christmas season (what we Western Christians call “Advent” and the Easterners name “Nativity Fast”) is in full swing. The Hollywood Christmas Parade duly took place, Las Posadas will soon start on Olvera Street, and the Los Angeles County “Holiday” Celebration will once again take place on the day of Christmas Eve.

One of the ongoing events of the season throughout the United States is the annual struggle best expressed by a note left on my Facebook page: “A more naïve generation sought to keep Christ in Christmas; we have to fight to keep Christmas in the Holiday.” All too true. But my heart has been warmed in a truly Dickensian manner by events in Rhode Island, and I shall ever wish everyone a Merry Christmas, given that I do not celebrate Hanukkah, solstice, or Kwanzaa.

“As the American Christmas has become ever more secular, it has correspondingly come to rest ever more firmly on “feelings” and nostalgia for relevance.”

There is also the oft-repeated mantra that Jewish people, atheists, and other non-Christians feel excluded by Christmas. As regards the first-named group, I can only cite comedians Jackie Mason and Evan Sayet. The former sage (an ordained rabbi) led a parade in New York in favor of saying Merry Christmas,  and the latter opined that “anyone who is offended because you hope he has a pleasant 25th of December is a moron!” [emphasis decidedly his]. Atheists should bear in mind that H. P. Lovecraft, one of the best known practitioners of their faith, was a decided fan of Christmas and wrote one of his longest poems in its praise.

As the American Christmas has become ever more secular, it has correspondingly come to rest more firmly on “feelings” and nostalgia for relevance. The problem with things such as A Christmas Carol, It’s a Wonderful Life, and innumerable TV holiday episodes is that this sort of “holiday magic” does not pierce the gloom for many who are lonely, hurting, hungry, or afraid. If any of those qualities apply to you on Christmas Eve, you will no doubt wake up with them on Christmas Day. The knowledge that Ebenezer Scrooge and George Bailey will have their problems sorted out will not help; it may even make things seem worse.

With Christmas, as with anything religious in origin, you only get out what you put in—no one will do your work for you. Faith is a gift, but you have to want it to get it. When my family came out to Hollywood in the mid-60s, Christmas seemed very sad to me. All of our relatives were in New England and New York, The Broadway department store’s Christmas displays were nice but could hardly compete with Macy’s and the rest, and worst of all, there was no snow!