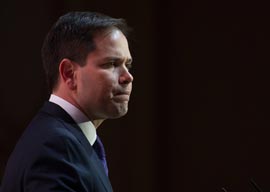 To the average observer, the ongoing fight for the Republican presidential nomination is enough to make you hurl.

Outside of Donald Trump’s common-sense-laced rants, little wisdom is found in the GOP’s televised pissing matches. There was one exception, however, in a recent debate when Florida senator Marco Rubio stuck it to the intellectual class and derided philosophy majors. “Welders make more money than philosophers. We need more welders and less philosophers,” he told a cheering audience.

The liberal media, which is predominantly composed of failed philosophy majors, wasted no time in pouncing on the comments. “Sorry Marco Rubio, philosophers make more than welders,” ran one CNN headline, which failed to acknowledge the difficulty in becoming a tenured philosophy professor. A writer for the Detroit Free Press (and chair of the Wayne State University’s philosophy department) called Rubio’s logic “really bad” and his argument a “non-sequitur.” He claimed that Rubio failed to account for the philosophical “pursuit of wisdom” and the “quest to understand the world and our place in it.”

Apparently it’s only philosophers who are capable of seeking wisdom. Blue-collar tradesmen only know how to clean shit and mop floors. They certainly can”t think on a higher level, or muster the brainpower to search for greater truths.

“Marco Rubio struck a nerve with his welders comment because he challenged the core from which liberalism draws strength: higher education..”

It’s normal for haughty academics to look down smugly upon lowly toilers. But why such outrage over Senator Rubio’s comments? Surely America does, in fact, need more welders than philosopher kings. Why, then, is the Florida senator being rebuked for encouraging hands-on labor over deep thinking?

Marco Rubio struck a nerve with his welders comment because he challenged the core from which liberalism draws strength: higher education. By appealing to more operose professions, he undercut the mechanism elites use to propagandize the public.

As economist F.A. Hayek points out in his illuminating essay “The Intellectuals and Socialism,” Western, democratic countries are heavily influenced by intellectuals who “wield” their power “by shaping public opinion.” During the 20th century, socialism as a movement grew primarily in intellectual circles before it trickled down to the masses. “Socialism,” Hayek wrote, “has never and nowhere been at first a working-class movement.”

Even after communism’s collapse, socialism remains en vogue on college campuses, as it has found support among the dogmas of political correctness, diversity, racial therapy, and victimhood. Today’s universities are not places of higher learning; they”re liberal agitprop manufacturers. Colleges take in impressionable teenagers, inject them with a full dosage of cultural Marxism, and churn out row after row of SJWs who can talk endlessly about oppression but can”t work a cash register.

The problem is only getting worse because it’s becoming harder for young adults to find decent employment without first going through the assembly line in the lemming-producing classrooms. According to a 2014 study by analytics firm Burning Glass Technologies, employers “appear to be using a bachelor’s degree as a rough, rule-of-thumb screening system to recruit better workers.”

Want a job as a graphic designer but don”t have a bachelor’s degree? Tough noogies!

Breaking the professionalizing aura around universities is a necessary step in restoring the honor that hard, grueling work confers. With the recent outbreak of protests by coddled college students across the country, it’s become clear that university has failed at its job of producing respectful and well-rounded adults. Graduates aren”t looking to get their mitts dirty as they begin the marathon of building a career. Rather, they have a checklist of perks and benefits that must be met before they even consider employment. And God forbid they are asked to work past 5 p.m.