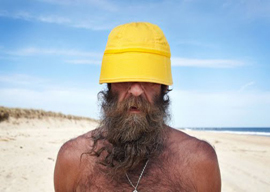 If all you ever did was watch TV—which is all that many Americans ever do—you’d think that Orange County, CA is so squeaky-clean, it actually squeaks. It’s where Mickey Mouse lives. It’s where real housewives have fake problems. Where every day’s a perfect day. Where life is smoother than a waxed surfboard, where the dull blue sky, the dull beige buildings, and the dull grey air all meld into a sun-scorched, germ-free, Beach Boys coma.

You wouldn’t think it’s the sort of place where a serial killer is randomly stabbing homeless men to death.

From December 20-30, three middle-aged “transient” males had the life knifed out of them by what Anaheim police chief John Welter calls “a serious, dangerous serial killer operating in Orange County.” All three victims were alone when murdered, and all were originally thought to have been sleeping when they were attacked.

Described as “a loner with a love for malt liquor,” 53-year-old James Patrick McGillivray had received over a dozen citations for public drunkenness since 2002 and also served stints for burglary convictions in 2006 and 2008. For months he had established what was termed “a quiet presence” on a strip-mall sidewalk near Charity’s Closet Thrift Shop in Placentia, CA. He toted around a backpack festooned with children’s cartoon characters Phineas and Ferb and wore a “Vietnam Veteran” cap although he was too young to have served. A thrift-shop volunteer called him “a nice guy,” and although McGillivray didn’t seem to do much besides suck up public spaces while getting plastered, the store’s owner remarked that “He was happy doing what he was doing.”

“You wouldn’t think it’s the sort of place where a serial killer is randomly stabbing homeless men to death.”

McGillivray was fatally stabbed around 8:15 PM on December 20. His body wasn’t discovered until the next morning, but surveillance cameras revealed a grainy photo of what is thought to be his killer—a youngish, shortish man wearing a black hoodie—approaching him on the sidewalk before murdering him. Police say they believe the killer had been “lying in wait” for up to an hour before attacking.

A small shrine has now been erected at the murder scene including a tag that reads, “Jim we know you’re at peace with mom.”

A week later and only three miles away, police found the 6’4”, 300-pound hulking carcass of Lloyd Middaugh, 42, on a riverbed bike trail in Anaheim. Middaugh had been living under a nearby bridge for roughly six months after being ejected from a halfway house for sex offenders—he had performed a “lewd and lascivious” act on a child under 14. Still, his mother recalled him as a “gentle giant” and a friend said, “He was just a decent, big guy. A big, goofy guy.” The decent, big, goofy gentle giant apparently spent most of his waking hours bumming cigarettes. A few nights before he died, friends said he had two packs of smokes and $12 in his pocket—they said he’d never seemed happier.

Paulus Cornelius “Dutch” Smit, 57, was described as “kind” and “sunny,” an “honest and sincere soul” who “seemed excited to be alive.” His bloody corpse was found at the bottom of a library stairwell in Yorba Linda, CA, on December 30. He reportedly had visited the library “almost daily” for a year, which a newspaper account noted was “a rarity for the homeless in the area.” Smit had spent time in Juvenile Hall during his teens for theft. Smit’s daughter Julia recalls that after her mother left him, he preferred living full-time on the streets to working a full-time job and found more “nobility” in referring to himself as a “wanderer” rather than a transient. Julia said it wasn’t until her teens that she accepted her father was what many people would call a bum: “Then I’d see him digging through Dumpsters and say, ‘That’s my father! That’s Papa!’” As with McGillivray, a small candlelit memorial has been constructed at Smit’s murder scene.