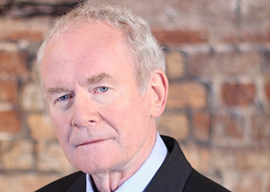 It would have been a surprise if the obituaries of Martin McGuinness, chief of staff of the Provisional IRA and subsequently a key figure in the peace process and then deputy first minister of Northern Ireland, hadn”t been, shall we say, mixed. For some he was a murdering thug, for others a man who turned away from violence and committed himself to peace and democracy. So the Tory politician Norman Tebbit, whose wife was left paralyzed by the bombing of the Brighton hotel during the Conservative Party conference when Margaret Thatcher narrowly escaped death, expressed the hope that there was a hot corner of hell reserved for McGuinness, while Bill Clinton, who had engaged with McGuinness in the development of the peace process, pronounced a eulogy at his funeral. Both had reason to speak as they did.

However, many who respected, if grudgingly, his contribution to the achievement of peace, or a sort of peace, in Northern Ireland pointed out that he never apologized for the violence he had orchestrated and the murders he had at the very least commanded. As Jenny McCartney wrote in The Spectator, “the enduring pain of those bereaved and injured by the IRA did not sit heavy on his conscience.” She added, “nor did he really pretend that it did. In this respect at least McGuinness was more honest than his eulogisers.”

To understand McGuinness, you have to understand the IRA and the history of Irish Republicanism. His colleague Gerry Adams, a more unattractive figure than McGuinness, declared, “Martin McGuinness was not a terrorist; he was a freedom fighter,” as if the two words were not the two sides of a coin.

“The mistake we make is surely to see things in black and white, to perceive people as wholly good or wholly evil.”

The A of the IRA stands for Army. McGuinness believed he was a soldier at war. Only force could get the British out of Ireland and end the partition of the island. This conviction is, or was, rooted deep in history. He changed course only when it became clear that his war was not going to be won. Then he devoted himself to peaceful politics, to power-sharing with his old enemy, the Democratic Unionist Party. In this new role he condemned those dissident Republic groups who remained committed to “the armed struggle,” but he did not repent of his past. He didn”t think he had been wrong, and it is arguable that without the IRA’s campaign of bombing, murder, and terror, the Protestant loyalist majority in Northern Ireland would have continued to dominate, and discriminate against, the Catholic population. For McGuinness it was the power of the gun that made the recourse to the ballot box possible. He may have been wrong, but this is what he believed.

Words and guns are both powerful persuaders. The Irish Free State, which became the Republic of Ireland, was conceived in ideas or ideals and born in bloodshed. When the treaty that created the Free State was signed in 1922, Michael Collins, the IRA gunman who had been brought to accept the need for compromise and negotiated the treaty, told Winston Churchill that in signing it he might be signing his own death warrant. He was quite right, dead within a few months, a victim of the civil war between those Republicans who accepted the treaty and those who didn”t. McGuinness was more fortunate, even though the dissident groups, “Real IRA” and “Continuity IRA,” regarded him as a traitor for his abandonment of the “armed struggle.” Fortunately these splinter groups are small and have few adherents. McGuinness won the intellectual battle within the wider Republican movement.

What’s in a word? Terrorist or freedom fighter? McGuinness saw himself as a soldier at war. The U.K. government, following its practice in other end-of-empire conflicts, never conceded that it was at war, and treated IRA fighters as criminals. This was a reasonable, perhaps sensible, attitude. Nevertheless it was contradicted by the facts on the ground. The province was flooded with troops. Soldiers patrolled the streets of Belfast and Derry. There were army watchtowers on the border with the Republic, and for a time the government interned suspects without bringing them to trial. It looked like a war, and from the IRA perspective, that’s what it was. If it quacks like a duck, then it is a duck.