A Confederacy of Censors 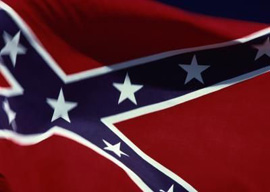 I”m living in North Carolina right now. When I first moved here, I thought I”d see people hanging out on their front porches, drinking whiskey with a splash of sweet tea, holding double-barrel shotguns close to their hearts, and proudly waving Rebel flags. I assumed the Southern girls would have that “girl next door” look but would feel no shame in clawing out their enemies” eyes.

Sadly, I have seen nothing of the sort.

Yesteryear’s states”-rights, secession-prone freedom fighters have been replaced by watered-down tools who attach anti-smoking stickers to their Prius windows and vote Democrat.

These days you can hardly mention the Confederacy without the maggots crawling all over you. The public schools” modern version of American history focuses on slavery’s continued existence during the Civil War and ignores the federal government’s aggression before the battles began. They”re creating a generation burdened with “white guilt.”

“It is almost as if Abraham Lincoln is giving us the finger from the grave.”

Luckily there is still a strong group of people who question whether it was necessary to kill over 600,000 Americans to abolish slavery, something plenty of other countries managed to do without such carnage. One such individual is Texanna Edwards, a senior at Tennessee’s Gibson County High School who made headlines last week for wearing a prom dress resembling the Confederate battle flag and then getting turned away by school bureaucrats who insisted the dress was too offensive.

If she”d worn an image of Che Guevara”much like how Johnny Depp and Carlos Santana do with impunity”she probably would have danced the night away without incident.

It leaves you assuming that public schools do not allow the celebration of any mainstream culture for fear that minorities might feel isolated.