A Confused Situation as to Syria and ISIS 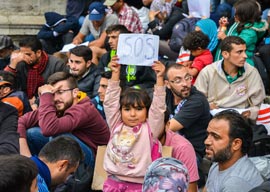 “[There] is a memo [at the Pentagon] that describes how we”re going to take out seven countries in five years, starting with Iraq, and then Syria, Lebanon, Libya, Somalia, Sudan and, finishing off, Iran.”
Gen. Wesley Clark, former Supreme Allied Commander of NATO (1997″2000), in a March 2, 2007, interview

“Next the statesmen will invent cheap lies, putting the blame upon the nation that is attacked, and every man will be glad of those conscience-soothing falsities, and will diligently study them, and refuse to examine any refutations of them.”
Mark Twain (1835″1910), American author and satirist

“The President does not have power under the Constitution to unilaterally authorize a military attack in a situation that does not involve stopping an actual or imminent threat to the nation.”
Sen. Barack Obama (D.-Ill.), in a Dec. 20, 2007, interview with The Boston Globe

“Our objective is clear, and that is: degrade and destroy ISIL [ISIS] so that it’s no longer a threat, not just to Iraq but also to the region and to the United States.”
Pres. Barack H. Obama, at a news conference on Sept. 3, 2014

The chaotic situation in Syria, a country of 22 million, source of some 220,000 Syrian deaths and of between 6 and 8 million refugees fleeing to Europe, is most confusing.

On the one hand, the Obama administration has been openly violating international law in actively supporting and arming a rebellious insurrection and a civil war against the established Assad government. On the other hand, the same administration seems to consider the Sunni-dominated and foreign-supported terrorist Islamic State organization (ISIS) opposed to Assad as illegitimate, and declares to want to “degrade and destroy” it through bombings.

“Destroying countries in violation of international law and with no empathy for the human suffering of millions of people seems to have been the official policy of the U.S. government over the last twenty years.”

If a foreign government wanted to destroy a country and turn it into ruins, that is probably what it should do, considering that the same Obama administration has for years supported protests and fanned the rebellion in Syria as part of the color revolutions the CIA has sponsored in many countries, and it has facilitated the rise of Islamic extremism directly and indirectly in the hope that it would succeed in toppling the secular Syrian regime. From the start, this has been a most ambivalent, a most irresponsible, a most inconsistent, a most incoherent, a most misguided, a most indecent, a most insane, a most destructive, and a most immoral policy, because it has destabilized both Iraq and Syria, because it has resulted in millions of victims, and because it has contributed in a big way to creating the psychopathic monster that is ISIS.

Indeed, the ongoing provoked chaos in Syria seems to be a repetition of what the Obama”cum”Hillary Clinton administration did in nearby Libya when that country was destabilized and destroyed from top to bottom through outside intervention, and reduced to a state of anarchy. It also followed the illegal military incursion by the Bush-Cheney administration in Iraq in order to engineer illegally a regime change in that country, at the same time that it left it completely destroyed and dysfunctional. All these interventions have resulted in unmitigated disasters.

Destroying countries in violation of international law and with no empathy for the human suffering of millions of people seems to have been the official policy of the US government over the last twenty years, whoever happened to sit in the White House at any given time, be he a Republican or a Democrat.

There is a pattern here that even the most ignorant and the most dishonest or obtuse brains cannot help but notice. We all know that this has been the well-publicized plan of the pro-Israel neocon clique that has been advising successive US governments ever since the George H. Bush administration of 1989″1993. Their overall objective was to reshape and transform (i.e., destabilize and destroy) the entire Middle East by provoking the downfall and breakup of Israel’s neighboring Arab countries (Iraq, Syria, Libya, etc.) and by using American military power and NATO to do it.

And now the Obama administration is working hard to deliberately and immorally destroy the country of Syria to please the Israeli government and other allies such as the totalitarian Wahhabist regime of Saudi Arabia and the increasingly Islamist regime in Turkey. Just as there was no al-Qaeda organization in Iraq before the Bush-Cheney administration invaded the country in 2003, there was no Islamic State (ISIS) in Syria before the US and its allies supported the insurrection against the Assad regime, beginning in 2011.

Surrounded by his neocon advisers, who are presumably recommended to their posts by deep-pocket political campaign contributors, President Barack H. Obama gives the sad spectacle of a politician who has morphed into a repeat of George W. Bush, using lies and false pretenses to justify an incoherent and destabilizing US policy in the Middle East. One day he says that his government’s policy is to contain and destroy the murderous ISIS Caliphate; the next day he gives a tacit or explicit go-ahead to the demagogue president of Turkey, Recep Tayyip Erdogan, to attack with F-16 fighter jets the only credible force on the ground fighting ISIS, besides the armed forces of the Iraqi and Syrian governments, the Kurdish militias.

And when the Russian government brings some assistance to the embattled Syrian government of Bashar al-Assad”still the legitimate government of that country, ravaged by outside intervention, by the way”President Barack H. Obama not only denounces such assistance, but warns Russia not to do it, curiously asserting that Russia’s efforts to back the Syrian government against ISIS are “doomed to failure”! What strategy and what failure? One would like to know.

Indeed, if President Obama were really serious in wanting to eradicate the medieval terrorist cancer that is ISIS, as he claims he does, one would think that he would logically welcome any assistance to reach that objective, whether it comes from Russia or from Iran, or anybody else. But no, Mr. Obama rather says that such assistance is not at all welcomed, at the same time that the killers of ISIS consolidate their control over a large part of Syria and of Iraq, and continue decapitating and persecuting Christian Assyrians, Shiites, and other ethnic groups. The result is the creation of millions of refugees whom only Europe seems ready, albeit reluctantly, to accept, after they have been expelled from Turkey, Lebanon, or Jordan, and while the other richest Arab nations, such as Saudi Arabia and Qatar, close their doors to them.