A Conspiracy of Counterfeiters 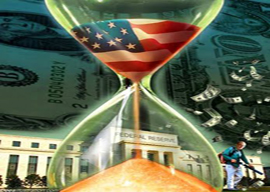 “Lenin is said to have declared that the best way to destroy the Capitalist System was to debauch the currency. By a continuing process of inflation, governments can confiscate, secretly and unobserved, an important part of the wealth of their citizens.”

“Lenin was certainly right,” John Maynard Keynes continued in his 1919 classic, “The Economic Consequences of the Peace.”

“There is no subtler, no surer means of overturning the existing basis of society than to debauch the currency. The process engages all the hidden forces of economic law on the side of destruction, and does it in a manner which not one man in a million is able to diagnose.”

Keynes warned that terrible hatreds would be unleashed against “profiteers” who enriched themselves through inflation as the middle class was wiped out. And he pointed with alarm to Germany, where the mark had lost most of its international value.

By November 1923, the German currency was worthless, hauled about in wheelbarrows to buy groceries. The middle class had been destroyed. German housewives were prostituting themselves to feed their families. That same month, Adolf Hitler attempted his Munich Beer Hall Putsch.

Today a coterie of economists is prodding Federal Reserve Chairman Ben Bernanke to induce inflation into the American economy.

Fearing falling prices, professor Kenneth Rogoff, former chief economist for the International Monetary Fund, is pushing for an inflation rate of 5 to 6 percent while conceding that his proposal is rife with peril and “we could end up with 200 percent inflation.”

Paul Krugman, Nobel Prize winner and columnist for The New York Times, is pushing Bernanke in the same direction.

Bernanke, writes Krugman, should take the advice he gave Japan in 2000, when he urged the Bank of Japan to stimulate the economy with “an announcement that the bank was seeking moderate inflation, ‘setting a target in the 3-4 percent range for inflation, to be maintained for a number of years.’”

And who inspired Bernanke to urge Tokyo to inflate? Krugman modestly credits himself.

“Was Mr. Bernanke on the right track? I think so—as well I should, since his paper was partly based on my own earlier work.”

But Krugman is not optimistic about Bernanke’s injecting the U.S. economy with a sufficient dose of inflation.