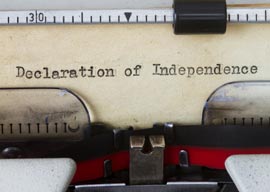 A good historian should be an annoyance. Most people want simple, pat answers to complex historical questions. Lousy historians give the people what they want. A genuinely competent historian can”t do that, even if it means raining on a merry parade or subverting someone else’s politically-correct good intentions.

I”ll give this example: Who wrote the Declaration of Independence? Thomas Jefferson, right? Well, sort of. If you want to be didactic about it, there is a longer answer. Jefferson wrote the initial draft, which was then (in Richard Henry Lee’s words) “mangled” by Congress, with edits (about one-fourth of Jefferson’s words were cut) and additions. So the long answer is, “Jefferson wrote the initial draft, borrowing certain ideas and phrases from other writers, and that draft was then heavily edited and, in parts, rewritten, by members of the Continental Congress.”

The average American need only know the “short” answer. But the historian needs to know the long and detailed one. Historians split hairs. It’s what we do.

I was reminded about this the other day at my local Starbucks. Waiting for my decaf mocha, I noticed the complimentary, broadsheet-sized eight-page newspaper distributed to every Starbucks as part of a joint project between the coffee giant and USA Today to gauge how racist we ugly Americans are (this is the same program from which the now-abandoned Starbucks policy of encouraging baristas to write “Race Together” on coffee cups arose).

The “Race Together” broadsheet, which is part of a “year-long campaign” according to the president of USA Today and the CEO of Starbucks, provides talking points about racism, and a survey where you can confess your racial sins.

Fine, whatever. I live in L.A. If politically correct nonsense stressed me out every time I encountered it, it would be my heart not my liver that”d be failing. But historical inaccuracies do, always, get under my skin.

The Starbucks/USA Today broadsheet has a page devoted to a timeline of racism in the U.S. Included is this nugget: “1942: Following the Dec. 7, 1941 Pearl Harbor attack, President Franklin Roosevelt signs an order to put 120,000 Japanese Americans into 10 internment camps.”

Not true. But to even attempt to correct that inaccurate statement opens one up to charges of being unsympathetic to the Japanese who were relocated and interned, and missing “the big picture” by focusing more on pesky facts than the larger message of “tolerance” and “brotherhood” or whatnot.

Secondly, Japanese Americans were not interned. Japanese noncitizens (“enemy aliens”) were interned. Japanese Americans (i.e., American citizens of Japanese descent) were forcibly relocated from the West Coast. But so what if we confuse relocation centers with internment camps? Sure, the difference was that Japanese Americans, under certain conditions (enlisting in the military, finding gainful employment away from the West Coast), could leave the centers, whereas most enemy aliens were imprisoned for the duration. But the truth is, the majority of relocation center inmates couldn”t leave, due in no small part to the popular prejudices of the time, which made it rather difficult to find work in small town America (or big city America, for that matter). So the distinction between internment and relocation was irrelevant to most Japanese Americans.

And then there’s the fact that the USA Today/Starbucks broadsheet straight-out lies about the 120,000 “interned” being “Japanese Americans.” Of the 107,000 people relocated or interned, roughly one-third were aliens. Uh oh, that presents another problem…if you”re going to discuss interned aliens along with relocated U.S. citizens, you probably should bring up the (roughly) 14,000 German and Italian aliens who were also interned.