A Fantasy Presidential Debate That Will Never Happen 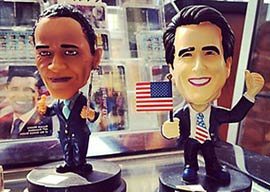 Good evening, Mr. Obama and Mr. Romney. I”ll be your sole interrogator tonight. I hope the audience welcomes you with as much warmth as they can manage.

And I don”t plan on voting next month. The state I live in will vote for Romney, and the county where I reside will vote for local black Democrats, so my vote won”t make a difference either way. I am effectively voiceless in the political process as it’s currently constructed. I”ve never consented to how you spend the taxes that you extract from me under threat of force. So I effectively feel silenced and extorted.

I realize that you feel that it’s within your power to grant me some illusory “right” to complain about this situation, but that doesn”t feel like it’s worth much when my gut tells me it won”t make a dent in the machine that supports both of you. I also feel that anyone who puts any faith in either political party or our “democratic” system in general is a fool.

No one I know”no one“says they feel hopeful about the future. I know a couple of people who recently turned 62 and opted for their early retirement benefits because despite the fact that you”ve siphoned money from them their entire lives, neither one of them is confident that your government will be solvent in the three years it would have taken for them to wait and receive full benefits.

If you”ve taught the American public anything, it’s how to grudgingly accept feeling powerless without completely losing their minds. Despite this flashy and expensive quadrennial electoral pageant, I feel as if your entire system depends on a toxic mix of the electorate’s apathy and learned helplessness. At times I feel as if you delight in rubbing our noses in our despair. Sure, there are many who feel hopeful, but I think all three of us can agree that they”re naÃ¯ve.

Both of you sicken and depress me. I can”t muster any emotion for either one of you beyond contempt. In politics one ascends to higher office by climbing a golden ladder of lies and evasion, and you are currently competing for the top rung.

Mr. Obama, the record shows you have left a lengthy trail of broken promises. Mr. Romney, your actions reveal someone who lacks an ideological core. Because I feel as if neither of you is trustworthy, I”ve drawn up special provisions in this debate contract which both of you have willingly signed. In keeping with these provisions, a team of physicians has introduced into your systems a cocktail of what are deemed to be the most currently reliable truth drugs. You”ve also been wired to polygraph machines and the hand-held lie detector currently used by the US military. These methods are not 100% foolproof, but they may serve as deterrents.

Now for my questions.

The first subject is foreign policy. Islamic terrorism has cost a few thousand American lives over the past dozen years, but ironically, not as many American lives as were lost in our endless wars of retaliation. How would you justify that? Moreover, how does a global network of overseas military bases “defend” us rather than create a worldwide impression that we are the aggressors? Why does the US seem highly selective when it comes to which corrupt dictatorships they attempt to subvert and overthrow? If you”re honestly concerned with national security, why isn”t there a 100-foot wall along our Mexican border and 100,000 armed agents ready to defend it?

There’s been a lot of noise lately about whether or not Iran is developing atomic weapons. Sidestepping whether this is cause for immediate concern, why is there almost total silence regarding whether Israel already has hundreds of atomic weapons? Finally, what does the average American get for supporting Israel beyond death (via terrorism) and taxes (via endless Middle Eastern wars)?

Now for domestic matters. Do you agree that if there’s any wealth redistribution to be done, it would benefit society more to set up a meritocratic system that subsidizes people with demonstrated intellectual potential rather than trying to prop up and placate those who may simply be stupid and lazy? Would you support financial incentives for high-IQ couples to procreate? If not, why not?