A Fire Bell in the Night for Norway 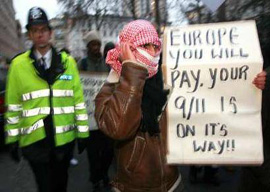 “Like a fire bell in the night,” wrote Thomas Jefferson in 1820, “this momentous question … awakened and filled me with terror. I considered it at once as the knell of the Union.”

Jefferson was writing of the sudden resurgence of the slavery issue in the debate on Missouri’s entry into the Union, as foreshadowing a civil war.

And that massacre in Oslo, where a terrorist detonated a fertilizer bomb to decapitate the government and proceeded to a youth camp to kill 68 children of Norway’s ruling elite, is a fire bell in the night for Europe. For Anders Behring Breivik is no Islamic terrorist.

He was born in Norway and chose as his targets not Muslims whose presence he detests, but the Labor Party leaders who let them into the country, and their children, the future leaders of that party.

Though Breivik is being called insane, that is the wrong word.

Breivik is evil—a cold-blooded, calculating killer—though a deluded man of some intelligence, who in his 1,500-page manifesto reveals a knowledge of the history, culture and politics of Europe.

“As for a climactic conflict between a once-Christian West and an Islamic world that is growing in numbers and advancing inexorably into Europe for the third time in 14 centuries, on this one, Breivik may be right.”

He admits to his “atrocious” but “necessary” crimes, done, he says, to bring attention to his ideas and advance his cause: a Crusader’s war between the real Europe and the “cultural Marxists” and Muslims they invited in to alter the ethnic character and swamp the culture of the Old Continent.

Specifically, Breivik wanted to kill three-time Prime Minister Gro Harlem Brundtland, the “mother of the nation,” who spoke at the camp on Utoeya Island, but departed before he arrived.

Predictably, the European press is linking Breivik to parties of the populist right that have arisen to oppose multiculturalism and immigration from the Islamic world. Breivik had belonged to the Progress Party, but quit because he found it insufficiently militant.

His writings are now being mined for references to U.S. conservative critics of multiculturalism and open borders. Purpose: demonize the American right, just as the berserker’s attack on Rep. Gabrielle Giffords in Tucson was used to smear Sarah Palin and Timothy McVeigh’s Oklahoma City bombing was used to savage Rush Limbaugh and conservative critics of Big Government.