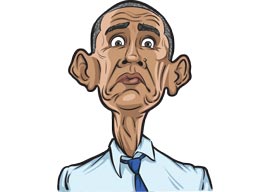 Perhaps there will come a day when I look back with fondness on the dithering incompetence of Obama”when the stiff pomposity of his ersatz Luther King speechifying no longer brings a trace of vomit to my mouth. Yet, for the moment, he worries me. He has made hesitancy a policy and prevarication an art form; he is so consumed with navel-gazing and haunted by the ghosts of intervention in Iraq and Afghanistan that lack of direction and decision mark his presence on the global stage. Neither the United States nor the world is safer for it.

Power is a complex thing, and the skilled exercise of it is hard. You either understand it or do not, and”as his administration has amply demonstrated”Obama lacks both facility and feel for what is demanded. There is no grip and there is no strategy. The peanut-headed Jimmy Carter was cut from the same inadequate cloth: always playing catch-up, always behind the curve, always being caught out by events. This fuels uncertainty, corrodes confidence, and creates a vacuum into which opponents and armed insurgents pour.

Thus Obama sat on his thumbs as the Islamic State took Mosul and headed for the Kurds; thus he tut-tutted and shook his head as Russia snatched the Crimea and used its proxies for a crude landgrab toward the Dnieper River in Ukraine. Thinking hard is fine, until it becomes an excuse for doing nothing and avoiding the need to face down a threat. Sometimes one just has to grow a pair. Matters are scarcely improved by the moral vacuousness and historical illiteracy of modern politicians; if you do not plot a steady course”or even know where you stand”the quicksand will eventually take you.

This inability to take a clear line, to commit, to actually lead: it is a malaise that infects every level of politics. Everyone is scared of giving offense, and therefore cannot say what they think; everyone must test their views against a focus group before they open their mouths. Little wonder we produce no statesmen. No surprise either that we have created a social environment in which the idle are rewarded, the morbidly obese tolerated, and the anti-Western creed of unreformed and fundamentalist Islam is allowed to stalk the streets.

Maybe Putin is right: we are soft and ridiculous.  Bring back Reagan and Thatcher.

Having recently written novels involving those two great founding fathers of modern espionage, Francis Walsingham and Robert Cecil, I have gained some inkling of the skulduggery and dark arts once employed in defending the realm. Let’s be honest: they were ruthless operators in an era of absolute monarchy, and they certainly would not have balked at a spot of waterboarding. Yet they comprehended totally the scale of existential threats, the need for vigilance, and the utility of taking the fight to the enemy.

Walsingham put agents aboard Spanish galleons to blow the ships to pieces; he used false soothsayers to spread black propaganda, predicting that the impending Spanish invasion of England was doomed (it was); and he probably assassinated the commander of the Armada (he died mysteriously) shortly before it set sail from Lisbon.