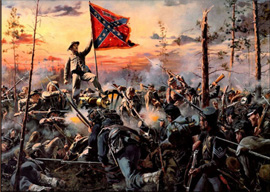 Confederates are a misunderstood bunch. April marked 150 years since the first shots were fired at Fort Sumter, launching the Civil War. Though hostilities didn’t last half as long as Vietnam or even our current Afghan skirmish, it’s the war that killed the most Americans and also is believed by many to be the most justified of our nation’s wars. After all, the bloodshed freed the slaves and paved the path for civil rights and Kumbaya. But even if the story has a happy ending (sort of), and even if slavery was intolerable, inhumane, evil, and economically idiotic, modern Americans stubbornly ignore the obvious fact that Lincoln’s war directly opposed the spirit with which this nation was founded, when 13 states decided to secede from their union, or “the British Empire” as it’s sometimes called. They founded a new nation through secession four score and seven years prior to Lincoln’s famous proclamation, which ludicrously implied his fight against secession was in the same spirit as our nation’s founding. In truth, Lincoln’s tyrannical, tax-loving nature was exactly the sort of oppression that Washington, et al., tried to dispose of back in 1776. The war was barely about slavery.

The rebellious Founding Fathers were quite clear when drafting the Constitution: “The powers not delegated to the United States by the Constitution, nor prohibited by it to the States, are reserved to the States respectively, or to the people.” These idealists understood that centralized government was a necessary evil, but they limited federal power and its revenue sources to the best of their ability. The Civil War was a battle over revenue.

Ask any knowledgeable Southerner, and he or she is likely to agree with Charles Dickens, who wrote:

…the Northern onslaught upon slavery is no more than a piece of specious humbug disguised to conceal its desire for economic control of the United States.…Union means so many millions a year lost to the South; secession means loss of the same millions to the North. The love of money is the root of this as many, many other evils. The quarrel between the North and South is, as it stands, solely a fiscal quarrel.

This fiscal quarrel dated back to the country’s founding, when a tariff was drafted into the Constitution and one of the first pieces of legislation the new Congress passed was the tariff of 1789, a duty of five to ten percent on imported goods. Before the Civil War, this tariff raised more than nine of every ten dollars in federal revenue.

“Money, the root of all of evils, was also the root of US history’s deadliest war. Slavery had little to do with either side’s hurt feelings.”

The first protective tariff was born in 1816, aimed at protecting Americans from having to compete with Europe’s cheap labor. This duty was also aimed at spreading around the Southern wealth and boosting the Northern industrialists’ selling power. Since the South exported most of its cotton and tobacco crops (only 20% of the Southern crop was sold domestically), it could either be paid for its exports in hard cash or through manufactured European goods. If Southerners chose the latter, they got a better price. It was a no-brainer, since before 1824, US tariff levels hovered around 20%. It was economical to buy from Europe, whose lower labor costs allowed their manufacturers to undercut their higher-paid counterparts in the Northern US.

Northerners, who initially wanted protection for their burgeoning manufacturing industry, now saw an opportunity for monopoly through what was slowly becoming a prohibitive tariff. If Congress kept raising the duty rate on imported goods, those rich Southerners would be forced to buy manufactured knickknacks such as iron and textiles from Northern factories. It was a sweet deal for the industrialists. Northern political dominance enabled Congress to pass a tariff averaging 35% late in 1824. When Congress passed the “Tariff of Abominations” in 1828, under which duties averaged over 50%, Southerners were more than a bit ticked off. They wound up paying 87% of total federal revenues.

In response to the Tariff of 1828, South Carolina refused to collect any duties on imported goods sold in her ports, and this so-called “nullification” of federal tax law precipitated a crisis in which the very first talk of secession was heard. President Andrew Jackson eventually caved, and the feds agreed to roll back tariffs to their 1816 levels over a ten-year period, and the levies would settle at around 15% by 1842. Congressional Democrats, mostly Southerners, were able to reduce the tariff laws further in the 1840s and 1850s. The 1857 rates were the lowest in history. Peace was achieved until the Panic of 1857, when protectionists again rallied for a high tariff as a remedy for the ensuing recession.

In May 1860, Congress waited until the senators from the lower six Southern states were missing from the rosters and spawned the Morrill Tariff, which took effect in March 1861, a few weeks before fighting began at Sumter. This tariff effectively undid Jackson’s compromise. The average tariff rose from about 15% to 37%, with increases to 47% within three years. And with the Southerners missing from the US Congress during the four-year war, tariffs on European goods skyrocketed to 49% by 1868. (Hey—who said war was cheap? But after the war had ended and funding for its efforts was no longer needed, high tariffs remained. Big surprise. When have the feds EVER given up a revenue stream?).