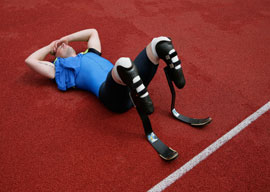 Legless South African Olympic runner Oscar Pistorius is now on trial for having killed”deliberately or otherwise”his girlfriend. Although I have my own theory of the case, based (as our opinions about most things are) more upon general principles and knowledge of the world than upon a detailed examination of the evidence, every man has the right to be considered innocent until a properly constituted court finds him otherwise. Therefore I shall only observe that it is a moot question whether we derive more pleasure from setting a man on a pedestal than from pulling him down from it. A fallen hero renders mankind a double service. He gives two pleasures for the price of one”on the way up and on the way down.

Personally I had never set Pistorius up on a mental pedestal. He was no hero of mine. I found the spectacle in which he took part distasteful, though I recognize the spirit, effort, and determination necessary to overcome his disability in order to participate in it. By themselves, however, spirit, effort, and determination justify nothing and can be as easily put to unworthy as to noble ends.

I dislike even more the attempt to drum the population up into enthusiasm for the Paralympics. To me it smacks of quasi-totalitarian propaganda. An atmosphere has been created in which to admit that one finds the spectacle distasteful is to be guilty of a hate crime, an accusation that nowadays can be hurled at almost anyone who wants to preserve public taste and decorum. The spectacle itself seems to me designed to allow one the illicit pleasure of the freak show while enjoying self-congratulation at one’s own generosity of spirit. I prefer less ostentatious, less orchestrated demonstrations of human decency.

“Our kindness, such as it is, has…become brittle, impersonal, theoretical, abstract, bureaucratic, and ideological, reflective of no genuine feeling.”

My parents gave me a good example of the latter when I was young. My best friend, from whom I was all but inseparable, contracted polio at age six and was paralyzed from the waist down. We remained the best of friends for several years afterwards, and from the first, I now realize, my parents behaved toward him with the most perfect tact, including him in every activity possible and never making him feel his disability. (Later in life he had a distinguished career.) I am sure they expected no praise for their decency, nor did they act by deduction from any abstract principle, though no doubt they could have provided one if asked. On the contrary, they acted from normal, genuine solidarity.

Perhaps because of my early experience with a disabled friend, I could never bring myself to laugh at circus dwarfs. Their antics always pained rather than amused me. I could not see their misfortune”surely no one would actually choose to be as they were”as funny, nor could I understand how anybody else did. My prejudice, if such it was, was only strengthened when I looked for the first time in the Prado at VÃ©lasquez’s portraits of the Spanish court dwarfs, and on the female dwarf in Las Meninas. Great art need have no moral message or meaning, I suppose, but for me these pictures definitely did. No one who looked at them seriously could ever thenceforth doubt that such dwarfs were full members of the human race who were not put on Earth for our diversion or amusement, to laugh at, to condescend to, or to treat in any way other than how my parents treated my paraplegic best friend.

Recently at an airport while waiting for a flight, I saw a man among a group of bikers who was not actually achondroplastic but of the same physical stature as an achondroplastic. He was dressed in the same fashion as his friends: leather and steel, with ironmongery through his nose and aggressive tattoos on his forearms. I was seized by sorrow: not only for him, but for all of us, with our contradictory and simultaneous need to belong to a group and yet to mark ourselves out from others, resolved (in this case) by absurd mimicry of a self-consciously brutalist fashion. Such is the human condition, especially nowadays, when the need to be an individual is felt more urgently and yet is more difficult to achieve than ever before.