A Godly Man in an Ungodly Age 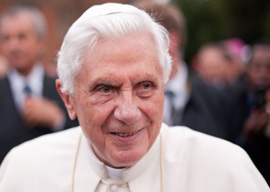 “To govern the bark of Saint Peter and proclaim the Gospel, both strength of mind and body are necessary, strength which in the last few months, has deteriorated in me to the extent that I have had to recognize my incapacity to adequately fulfill the ministry entrusted to me.”

With those brave, wise, simple words, Benedict XVI announced an end of his papacy. How stands the Church he has led for eight years?

While he could not match the charisma of his predecessor, John Paul II, his has been a successful papacy. He restored some of the ancient beauty and majesty to the liturgy. He brought back to the fold separated Anglican brethren. The Church is making converts in sub-Saharan Africa. And in America, new traditionalist colleges and seminaries have begun to flourish.

“The Secular City seems to have triumphed over the City of God.”

That is looking back eight years. Looking back half a century, to that October day in 1962 when Pope John XXIII declared the opening of Vatican II, the Church appears to have been in a decline that, in parts of the world, seems to be leading to near extinction.

At Vatican II, the Rev. Joseph Ratzinger, the future Benedict XVI, was among the reformers who were going to bring the church into the modern world. The encounter did not turn out well.

In 1965, three in four American Catholics attended Sunday mass. Today, it is closer to one in four. The number of priests has fallen by a third, of nuns by two-thirds. Orders like the Christian Brothers have virtually vanished. The Jesuits are down to a fraction of their strength in the 1950s.

Parochial schools teaching 4.5 million children in the early 1960s were teaching a third of that number at the end of the century. Catholic high schools lost half their enrollment. Churches have been put up for sale to pay diocesan debts.

And the predator-priest sex-abuse scandal, with the offenses dating back decades, continues to suppurate and stain her reputation and extract billions from the Sunday collections of the abiding faithful.