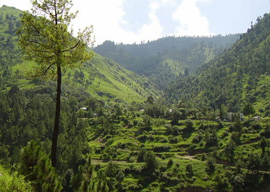 Though Abbottabad’s eponymous founder might approve of the rough justice OBL received there early Monday morning, something is very wrong with the establishment that calls the old cantonment home.

Neither Sandhurst nostalgia nor Punjabi equivocation can explain a respect for privacy that extended to quartering a private army mere yards from a national war college’s fences, or the repression of gossip as to why an all-mod-cons McMansion set in a walled park should not boast that oldfangled convenience, a telephone.

Abbottabad long ago rode its attractive location to outstrip the other outposts of Victorian Empire dotting the Indus. It became an emerging nuclear power’s seat of military education and a retirement town for many of its senior intelligence executives. In simmering South Asia, what’s not to like about a hill station featuring umpteen holes of golf, a polo club where handicapped players are the norm, and hot and cold running service personnel?

“After Monday morning’s blazing forty-minute firefight, one wonders what the hell they drank in the heli on the long flight home.”

Yet national security establishments are, after all, about security, and that security was breached from top to bottom in allowing Osama bin Laden to achieve an undeserved measure of domestic tranquility inside what amounts to a gated retirement community abutting Pakistan’s West Point.

Now as in the days of Major Abbott, the road to OBL’s side of Abbottabad very much resembles Mulholland Drive. There at the base of a small but perfect range of verdant mountains is an old polo club testifying to the horse-healthy climate that enchanted Abbott in the first place. In addition to the upscale swaths of retirement villas on the hillsides and the manicured lawns of its military academies and think tanks, the town runs downhill and down-market along its river into a raffish noncom cantonment whose souks offer wedding turbans fashioned of fresh-pressed money, animal figures encrusted in mirror fragments to evade Koranic censure as graven images, and billboards touting guaranteed cures for the dental and venereal diseases of man and beast.

Compared to what lies further up the Karakoram Highway, which claws its way into the clouds as it snakes up through Hunza to the Chinese border, Abbottabad seems a pretty civilized place”an illusion that evaporates along with English as a second language as soon as you wander off from its cosmopolitan core.