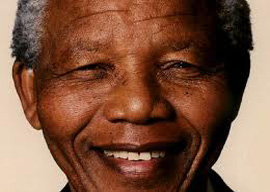 But then, as is the norm for white South Africans in the limelight, Els went on to praise Nelson Mandela:

It would be wonderful were it so.

Mandela was magnanimous in political victory, but then so was Robert Mugabe, whose leadership in Zimbabwe has resulted in around a million refugees arriving in South Africa. This has exacerbated unemployment, spiked crime, put immense pressure on social services, and worsened ethnic tension.

“Mandela was magnanimous in political victory, but then so was Robert Mugabe.”

Corruption is now endemic in the country at every level. It was on Mandela’s watch when the now-notorious South African Arms Deal was planned, ultimately consuming a mountain of public money and yielding very little of benefit to anyone other than the “previously disadvantaged” (a euphemism for black people) clique at the higher echelon of the ANC. Current President Jacob Zuma was almost certainly one of the beneficiaries (Schabir Shaik, Zuma’s former business partner, was convicted of paying bribes to Zuma), but charges against Zuma were dropped on spurious grounds presently being challenged by opposition party the Democratic Alliance.

Ernie gushed with a commendable spirit of goodwill, but it appears Zuma isn”t so kindly disposed. Earlier this year Andre Visagie, leader of an Afrikaner pressure group, lodged a hate-speech complaint against Zuma, accusing him of exhorting his audience to commit murder by singing the song “Dubul’ iBhunu” (“Shoot the Boer”) at January’s ANC celebrations. In a case brought earlier against former ANC Youth League President Julius Malema for singing the same song, the court ruled it was indeed illegal because it encouraged violence against a specific, race-based group.

How much direct impact Zuma’s “Shoot the Boer” entreaties have had on his followers will never be known, but statistics suggest they are listening. Ernie’s fellow Afrikaners on the farms are under siege. Andre Botha of the farmers” union Agri SA says there have been 11,785 attacks and 1,804 farmers murdered since the ANC assumed power, an average of two murders per week. Many of these have been grisly in the extreme.