A Harangue About Slang 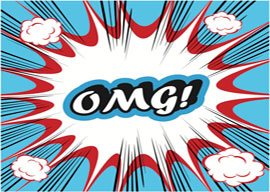 Following up last week’s rant about cant, kindly permit me a harangue about slang and the affliction of bad diction. Got that? Last week, the empty, insincere things we say; this week, the sloppy, lazy way we say them.

My inspiration here is a news story from the ever-reliable Mail Online, October 10th: “Why are so many middle-class children speaking in Jamaican patois?“ London Journalist Nick Harding is listening to his 11-year-old daughter on the phone with a coeval (which, no, does not mean “a person you”re evil together with”):

This indecipherable code-speak (“sick” means awesome, “DW” is don”t worry and “yolo” means you only live once) was delivered in an accent I could only place as somewhere between South London, downtown Los Angeles and Kingston, Jamaica.

It certainly isn”t indigenous to our home village of Ashtead, in the rolling Surrey hills.

Surrey is Stockbroker Belt. We”re talking upper-middle-class folk here”the kind who make their own jam. Apparently the offspring of well-heeled Brits nowadays, among themselves, talk like Ali G in a dialect known officially as Multicultural Youth English (MYE).

The main phonological feature of MYE is the collapsing of complex structures to simpler ones. So diphthongs become pure vowels (e.g., “mah” for “my”), the conjugation of the main copulative verb is stripped down to “is” and “was” (e.g., “I is,” “you was”), and all question tags become “innit?”

Semantically there seems to be a heavy reliance on acronyms and text-message abbreviations. I tried to confirm this with a professional linguist friend, but he DK-ed me.

The Brit kids are only talking like this among themselves, mind.

When Millie ended the call, she turned to me, smiled and asked: “What’s for supper please, Dad?” in perfect Received Pronunciation.

And Mr. Harding gets California wrong. The main linguistic problem in downtown LA is finding a person who can speak English in any form. He’s thinking of a different locale:

As this case from across the pond shows, the “like” construction has escaped from its reservation in the San Fernando Valley and is now well-nigh universal among under-20 Anglosphere females of all classes.

I heard again about this across the lunch table from a lady of high education and refinement who teaches law at a prestigious university. She, speaking of her undergraduate students: “How can I get them to think clearly when they can”t speak clearly? It’s “like” this and “like” that, and “so“ this and “totally” that. Their speech is a mess. Doesn”t that mean their minds are a mess, too?”

Perhaps it does. “Language is the dress of thought,” and sloppy language suggests poor thinking. Dumb people don”t speak well; we”ve all observed that.

These are deep waters we”ve waded into here, though. There is an entire academic discipline called Cognitive Linguistics dedicated to untangling the connections between thought and speech. The waters have been considerably muddied by PC log-rolling on the part of the academics (“There’s no such thing as “primitive”!”), but they do at least seem to have shown that the structural complexity of an established language bears no relation to the civilizational level of its speakers.