A Heaping Helping of Hitlers 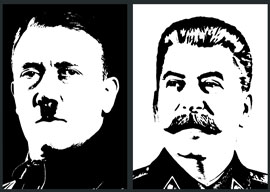 In an infamous March 27, 1942, diary entry, Joseph Goebbels estimated that 60% of Polish Jewry would have to be “liquidated.” That translated to about 1.4 million people. Compare that with Mao’s declaration in 1948 that “one-tenth of the peasants would have to be destroyed.” Going by China’s population at the time, that translated to 50 million people targeted for destruction. Yet Obama’s communications director was able to cite Mao as one of her political inspirations without losing her job. And here in L.A. we have an exceptionally popular chain of Mao Zedong tribute restaurants (Mao’s Kitchen: “Chinese country-style cooking with Red memories.” No, I”m not making that up), a favorite hangout of lefties, hipsters, millennials, and others afflicted with anencephaly.

How long do you think a “Goebbels Burgers” joint, even one intended to be ironic, would last in L.A.?

By fooling themselves into believing that the victims of communist mass murder had essentially asked for it by committing individual acts of resistance, by ignoring the fact that most victims of communist terror had been targeted because of the class, nationality, or ethnicity of their birth, leftists can divorce that hundred-million figure from communism itself. It wasn”t the ideology that got those people killed; it was just a few cranky dictators taking revenge on those who challenged them. By believing this bunk, leftists can continue their love affair with communism guilt-free, with the untroubled mind of the willfully ignorant. Sure, it’s an ideology that promotes class warfare, but that doesn”t mean it ever led to class liquidations.

As a conservative with a sense of history, I never had the luxury of self-inflicted ignorance about communism’s vile record. However, I also never demanded or needed a “safe space” to protect my fragile little mind from the effects of living in a city filled with Mao, Marx, and Che worshippers. Leftists, on the other hand, are apparently having their delicate sensibilities shattered by exposure to Trump and his alt-right supporters. I may not agree with Trump’s “fashy” fanatics, but I find the hypocrites on the left far more execrable, and I”m truly enjoying the experience of seeing them get a taste of their own medicine. They”ve managed to convince themselves that Trump really is Hitler, a belief reinforced not by Trump”who is most certainly not Hitler”but by the crafty and vocal members of the alt right. Leftists are finding out how it feels to be exposed to adherents of certain “historically discredited” ideologies, and it’s driving them insane. Even the relatively smart ones are losing it.

It’s fun to watch, and reason enough to give thanks for Trump. And if Wikipedia wants to take that as yet another “endorsement,” well then, so be it.