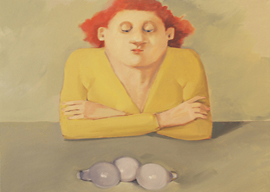 How many feminists does it take to screw in a lightbulb?

If you replied, “That’s not funny!” you need to get with it.

That’s according to The Atlantic‘s Sandra Tsing Loh in a widely discussed (and derided) piece in that magazine’s October issue.

Called “The Weaker Sex,” it’s subtitled “How the new gender economics has more and more professional-class women looking at their mates and thinking: How long until I vote you off the island?”

Magazine writing hasn”t been a glamorous, well-compensated career since the end of the Harold Hayes era at Esquire. Nevertheless, I”m a female writer-for-hire and therefore one of the “weaker sex” myself. Forgive my pangs of professional jealousy, but when did the once prestigious Atlantic start hiring writers who use TV catchphrases dating back to the days when you could still get a chicken sandwich at Windows on the World?

“Nothing you can do in your pajamas is real work.”

Tsing Loh goes to great lengths to inform us that, well, I”m not sure exactly, but it has something to do with a dinner party at which she and her mostly divorced female friends commiserate with the only one of their number still married, name of Annette.

Having made exponentially less than that while working at a household-name nonprofit, I couldn”t help but speculate darkly on that particular foundation’s cost-revenue ratio.

Although I have to admit, that “mid-“ was a cute touch on Tsing Loh’s part. I presume she and her friends are meant to represent a statistically significant slice of the population. Otherwise, this epochal new trend she’s stumbled upon would be no such thing.

(Another revealing little touch on Tsing Loh’s part, although this time unintentional: That hot tub’s “the,” as if every American just happens to have one gurgling away somewhere on the premises, in walking distance from “the oven” and “the fridge.”)