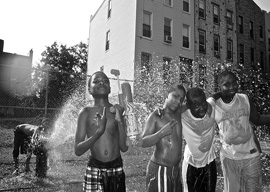 At the end of last year’s long, hot, flash-mob summer, Philadelphia Mayor Michael Nutter stood at a church pulpit in the City of Brotherly Love doing his best Bill Cosby impersonation. Nutter chided young black kids to “Take those God-darn hoodies down, especially in the summer….You have damaged your own race.” He also flayed parents for not keeping a watchful eye on their kids after a string of random violence in the Center City shopping and entertainment district.

A recent Pew survey found that while Nutter enjoys a high overall favorability rating, 74% believe that crime is a very serious problem in the city. In response, Nutter has embarked on a “Fun Safe Summer” PSA campaign which a Philadelphia blogger suggests is basically a plea against flash mobs.

“We no longer aim to shape our youth. We don”t have the manpower or the will.”

Philadelphia’s only the flagship. Rahm Emanuel used tough talk against a spate of wildings in downtown Chicago last year, and other cities are trying to defuse these powder kegs. After widespread violence at last year’s Coventry Arts Festival, Cleveland Heights, OH city officials have canceled this year’s events.

In Kansas City, a team of researchers studied the scourge of flash mobs that culminated last summer in a shooting in the city’s prestigious Plaza shopping district. They suggested that violent flash mobs arise from boredom and a lack of entertainment options. The researchers suggested that activities such as a “College Basketball Experience” or underground rap venues would help squash the problem.

A friend of mine who was passing through the Plaza district on the night of a flash mob told me that businesses in the Plaza area had threatened to close up shop if the city or Plaza management didn”t do something about the violence. The city responded by instituting a curfew, much as Mayor Nutter has done in Philadelphia.

Violent flash mobs are indicative of several long-term social trends. Daniel Patrick Moynihan’s warnings from the 1960s about the disintegration of the family”particularly the black family”have come true. Charles Murray has suggested something similar could be happening among whites. Decades of this social shift away from active paternalistic influence have led to a cultural sickness.