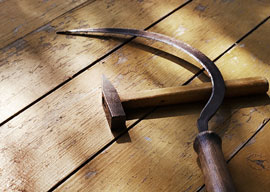 I suppose everyone has his madeleine moment“that experience, sensory or otherwise, that awakens in him a long train of memories. Actually, the longer one lives the more madeleine moments there are. The other day, for example, I had one while reading the newspaper.

The story was about an elderly couple who had managed somehow to keep three women in subjection in their home in London for thirty years. It was a very peculiar story and we have not heard the last of it. Much remains to be revealed.

A Mr. and Mrs. Balakrishnan, aged 73 and 67 respectively, allegedly kept a Malaysian woman aged 69, an Irish woman aged 57, and an English woman aged 30 locked in their flat in South London, using them as domestic “slaves.” One of them managed by stealth to telephone the outside world, and the police arrived to rescue them. Such, at any rate, was the story. One might wonder how the Balakrishnans prevailed over the other three for so long a period, but details will no doubt emerge in the coming weeks or months.

“He was a theoretician rather than an activist, among other reasons because he found it so difficult to get up in the mornings.”

The madeleine effect was produced by reading that the Balakrishnans were members in the 1970s of a Marxist groupuscule called the Communist Party of England (Marxist-Leninist). In those days, anything with the words Marxist-Leninist after it meant Maoist, and the Maoists of those days made the average communist seem staid and respectable.

The Balakrishnans, however, had a falling out with the CPE(M-L) over small doctrinal questions such as how many class enemies could be shot on the edge of a mass grave. Such differences over tiny matters led to immediate expulsions and excommunications. The Balakrishnans were expelled from the CPE(M-L) for “conspiratorial and splittist activities,” splittist being a technical term for anyone who disagreed with the leader of the groupuscule from which he was allegedly producing a split. Considering that the groupuscule always viewed itself in the vanguard of the whole world’s proletariat, splittism was a very serious offense: It risked confusing the world proletariat and leading them to mistake its own interests by following the splittist faction instead of the true, real Marxist-Leninists.

I was taken back to my days as a student, when in my lodgings there lived a man called George who was a fervent communist, though the son of refugees from the 1956 Hungarian uprising. He was a theoretician rather than an activist, among other reasons because he found it so difficult to get up in the mornings, but one day he introduced Sean into the household.

Sean had just come over to England from Ireland not so much to find work”as most of his countrymen who made the journey in those days did”as to destroy work, at least under present oppressive but pre-revolutionary conditions. It was his intention to work in a car factory and sabotage the British car industry by undermining it from within. In the event it wasn”t necessary for him to do so because it was auto-sabotaging, as it were, thanks to the ineffable stupidity, dishonesty, and laziness of so many portions of the British population from top to bottom.

Sean was a member of an organization known that called itself the British and Irish Communist Organisation“how important a member I do not know, but the groupuscule, yet another in the vanguard of the World Revolution, was so small that I suppose that almost any member of it was of cabinet rank. It did, however, have what every Marxist groupuscule needs, namely a “theoretical journal,” in this case a cyclostyled A4 sheet folded and stapled together with other such sheets. It did not have an extensive circulation, I imagine, but many of the organization’s publications were stored in the house. You can find some of them on AbeBooks, and if I had taken the trouble to preserve them they would have been worth quite a bit by now. But of course they are worth quite a bit because people like me didn”t keep them. Suffice it to say that they are of specialist interest.