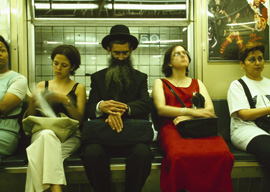 I attended an event for Pat Buchanan and his biographer Tim Stanley at DC’s Politics and Prose Bookstore on February 17. After Tim and Pat’s informative presentations, the audience was invited to ask questions. Most of the questions seemed to come from admiring remnants of the Buchanan Brigades.

But there was one discordant note that came from a disheveled grouch who I knew would be a pain as soon as I heard his opening statement: “Now, I”m going to say something you won”t want to hear.”

What followed was resentment badly masked as “concern.” This party pooper announced that he was Jewish and therefore entitled to special consideration in this mixed multitude. He was feeling very insecure because “There would be no place for me in a world without the diversity that Mr. Buchanan would like to abolish.” He seemed to think everyone else in the room should grant him an elevated status”perhaps somewhere between an ordinary feminist and a black lesbian”because of his ancestry.

“Let those who want more diversity have it without inflicting their tastes on the unwilling.”

The diversity we”re now pushing at least made the questioner feel safe in what might otherwise be our North American Continental House of Horrors. Absent this diversity, or its indefinite expansion, the speaker would no longer be able to identify himself as an American. He would be a very frightened Jew, undoubtedly in search of a new home.

Pat tried to look sympathetic but in his response, he pointed out certain obvious facts. For example, when the US set up shop in the 1780s, over ninety percent of the population was Protestant, and most of the rest were Catholic. Jews, who then came mostly from Spain and Portugal by way of Holland or South America, made up a small fraction of the American population, but there is no indication they were disturbed about having to live in a very Christian country. They thought they had landed in paradise and rejoiced at the tolerance their Christian neighbors bestowed on them.

Pat’s questioner did not seem to believe anyone had a right to resist his notion of diversity. He acted not at all concerned about how our multicultural society throttles the opposition and brainwashes everyone in educational and professional institutions to make them “sensitive.” That’s what diversity now involves: punishing those who won”t go along with government-imposed programs about how to relate to everyone else. The term that best describes such politics is not tolerance but totalitarianism. In the name of a supposedly ennobling diversity, people now live in fear of saying or doing something that is “actionable” or may cost them their jobs and social respectability. In Europe the celebration of diversity has gone even further: Those who grumble too loudly about being culturally enriched can land up in jail as abettors of “hate.”