A Narrow View of Things 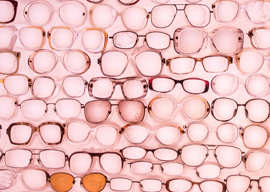 Intellectuals are often shortsighted, failing to see what is before their very nose. Their object is to obscure the obvious and to make complex the simple, so that they are then needed to lead humanity away from its ignorance and stupidity. With the inexorable rise of tertiary education, we have more intellectuals than ever before, and yet final enlightenment seems as elusive as ever. Man remains a problem-creating animal.

A paper in last week’s British Medical Journal reports that shortsightedness is highly correlated with years spent in education. The authors claim to have eliminated the possibility that the myopic are more intelligent than the perfectly sighted by controlling for genetic factors, and that the relationship is causative. Education is bad for your eyesight.

My own myopia was late in developing, perhaps because I never studied very hard, or as hard as I ought to have studied. I discovered it in a peculiar way. I was attending a clinic-pathological conference in my hospital during which some slides of the histology of the patient under discussion were shown. I protested that they were not in focus—as far as I was concerned they were merely a pink and blue blur. My young colleague sitting next to me handed me his spectacles and said, “Here, have a look through these.” It came as a revelation.

I discovered that, probably for some years, I had been seeing the world as an impressionist painting. When I obtained my own pair, the world regained its sharp edges and everything no longer melted into everything else. It was odd how I had accepted my own inability to see properly and thought the problem was with the world, not with me. The power of egotism is great.

“Intelligence, learning, and thought have not always been welcomed by political regimes of a paranoid bent.”

Of course, the association of myopia with intelligence, learning, and thought is an old one. Intelligence, learning, and thought have not always been welcomed by political regimes of a paranoid bent. I have been to two countries in which the wearing of spectacles was suspect, if not outright prohibited. They were North Korea and Equatorial Guinea. In North Korea I saw no one on the street, in the mass parades, or at the stadium seating 150,000 people wearing them and thought this strange, as Koreans are genetically predisposed to myopia. When I asked my personal spy who accompanied me everywhere where the people who wore glasses were, he replied, “That is a problem we have solved.” It was not by laser surgery, either, though the precise method of the solution went unsolved. The three successive heads of the Kim dynasty have all worn glasses, evidence of their superior, indeed unprecedented, intelligence.

Equatorial Guinea’s first president, uncle to the present president who has been in power for 38 years (so far), was called Macias Nguema and was one of the great unknown tyrants of the 20th century. He was democratically elected but was no democrat. As Mr. Erdogan is reported to have said, democracy is a train that you alight once you have reached your destination—in Macias Nguema’s case, the killing or exile of half his country’s population and the enslavement of the rest.

Among his many peculiarities was a hatred of people who wore glasses, whom he assumed to be intellectuals and therefore dangerous. I surmise that this hatred had its origin in the three times he failed his exams to enter the Spanish colonial civil service (Equatorial Guinea was a Spanish colony until 1968). He restored that most desirable of all human qualities, self-esteem, by the degradation of his countrymen in general, and people with glasses in particular. If you kill all the people of above-average intelligence, your chances of having above-average intelligence yourself rise. By the way, in the early 1970s, a Tutsi-dominated government in Burundi attempted to kill every single Hutu who had been to secondary school, and very nearly succeeded in the effort. As former British prime minister Anthony Blair put it, outlining his priorities on assuming office, “Education! Education! Education!”