A Nightmare of Olympic Proportions 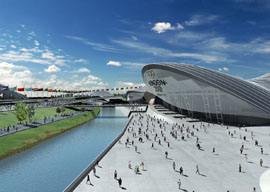 The omens were bad from the beginning. The day after the IOC awarded the 2012 Olympics to London and while Mayor Ken Livingstone’s bidding team was celebrating in Singapore, four bombs exploded on London Transport. It reduced much of London’s activity to a standstill. Mayor Livingstone could not get back in time to do his imitation of Rudy Giuliani, who actually was in London and could do his own imitations.

From then until the most recent bad news—Olympic mascots are being produced under Chinese slave-labor conditions—the enterprise has been dogged with as much ill fate as other Olympic projects. Those of us who have been arguing that this was a very bad idea, an expensive pharaonic project that will indenture us for decades, have been proved right over and over again.

“Why not have future Olympic Games in the same place every four years, as the ancient Greeks were supposed to have done?”

The explosions of 7/7 and the failed explosions of 7/21 suddenly reminded the government of the difficulties in mounting proper security at the Olympic Games. The original derisory estimate for security has now risen to £1 billion, according to a recent article in the Evening Standard, which admitted this reluctantly, as it has become a flag-waver and drumbeater for the Olympics. Prime Minister David Cameron was soon chiding those Moaning Minnies who would not support the wonderful opportunity that the Olympic Games will bring to London by pointing out that the presence of many multinational CEOs would bring in £1 billion immediately. He did not explain how that was going to happen.

As projected expenses doubled and tripled, as arguments unspooled between various personalities and organizations, as more of London’s streets were slowly dug up for works allegedly related to “London 2012,” it became obvious that other slogans had to be produced to retain support.

The Olympics were pronounced to be wide-open and inclusive as well as an instrument to revive sport. But the Olympic Games are hardly inclusive. They are open only to the highest, fastest, longest, and strongest, despite the introduction of such preposterous “sports” as beach volleyball in Trafalgar Square. Sporting activity has remained stubbornly unrevived, pursued by those who would have done so anyway. It would have been more sensible to spend a very small part of the money on new playing fields for children.