A Paean to Pamplona 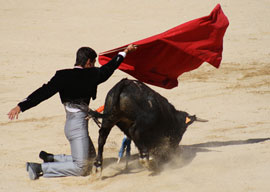 In 2009 I first came to Pamplona to run with the bulls. I was terrified in that complete and overwhelming way that total ignorance brings, standing on a street corner and waiting for death to come.

I comported myself honorably but not brilliantly and did so again two days later before boarding a train to Barcelona and vowing never to come to the city again. The relentlessly loud and bad music, the all-day drinking by people who clearly hadn’t washed in some time, and the fact that the corridas were made abysmal with music played by multiple bands in the audience in apparent competition with one another, all combined to set me firmly against this Navarran Fiesta. The place seemed crude, cruel, and uncouth compared to the sun-blasted, deathless dignity of Andalusia where my aficion for the bulls was formed.

My two earlier runs in ‘09 to one side, I had spent the year of 2010 dodging toreando cattle around Spain and Portugal, leaping into the streets with a confidence I have not since recovered, running directly between two bulls in my old high-school athletics blazer.

“No one who’s boring comes to Pamplona in the first place, and no one weak stays for more than a day.”

This year I returned for the Festival of San FermÃ­n, the summer fair dedicated to Pamplona’s first bishop.

The obvious advantage of having a bull in front of you in the street is that he clears a path through the 2,000-4,000 people packed into that half a mile. The one behind is the real problem: The picture linked above was snapped at the moment the bull’s horn was cracking the screen of the iPhone in my right pocket, a contemporary variant of the cigarette case stopping the opponent’s bullet in a duel. (I had the detail image as the screensaver on that cell phone, which I never had repaired, as a memento until it was stolen a year later at a bar less than a hundred yards away from that spot. Such is Pamplona. This year I took an actual silver cigarette case in its place just in case.)

Two days after that moment of glory I found myself pinned against the wall by another bull and understood that there was more technique to this than I had at first thought.

I gradually developed a strange, all-encompassing love for Pamplona despite its smells, sounds, occasional vulgarities, and infrequent barbarities. And that love has continued to grow as I realize that its vices, for all the annoyance they cause, are also part of the reason you fall in love in the first place. Going to a town where six half-ton fighting bulls and six one-ton steers are released into the streets by the city council while the police stand by and watch is one of life’s great pleasures.

However, this is no simple act of hedonism. The great runners all have a spirituality or at a least a philosophy of why they run.

I see it as a pagan thing and as such as about the animal within us; this is reflected in the cave art that litters that part of Spain. In this the encierro differs massively from the corrida. What happens in the plaza de toros is the ritualized and stylized killing of an animal by a man every fiber of whose being, from his stance to his technique to the gold braid on his silk costume, shows how far above animals, nature, and even death itself he is. The corrida is not pagan, but is the true embodiment of that odd cocktail of a phrase: Roman Catholic.