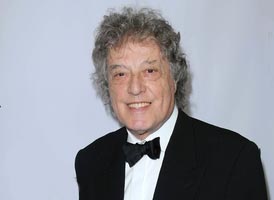 As a Christmas present, I received the book version of The Hard Problem, the latest play by Sir Tom Stoppard. It’s the great Tory playwright’s first new work for the stage since his Rock “n” Roll in 2006.

Granted, it’s perfectly reasonable to complain that a playwright who is best enjoyed in two stages”first reading the book at home, then watching the play in the theater”is too much work for what is supposed to be a relaxing evening out. Still, Stoppard has been an ornament of our civilization for a half century (his Rosencrantz and Guildenstern Are Dead debuted in 1966), and he works awfully hard to make his plays as simple as possible. (But, as Einstein said, no simpler.)

I”ve been reading Stoppard’s plays for forty years now. Despite the new work’s seemingly foreboding highbrow subject matter”the title refers to the “hard problem of consciousness“ formulated by philosopher David Chalmers”this may be the most lucid and serene of all of Stoppard’s works. It’s not as ambitious or as emotionally resonant as Stoppard’s 1993 masterpiece Arcadia, but then what play is? Nonetheless, it offers the most straightforward introduction to Stoppard’s work since his 1982 romantic dramedy The Real Thing, which preceded his turn toward science as subject matter in the late 1980s.

The bickering neurobiologists of The Hard Problem return to the moral philosophy questions”Does God exist? What is virtue? How can free will be reconciled with the study of nature and nurture? Can altruism exist without consciousness?“that were argued with such manic wit by rival academic philosophers in his 1972 farce Jumpers.

“Stoppard explains that the play grew out of an argument he started with Dawkins over his 1976 book The Selfish Gene.”

That was the play that cemented Stoppard’s reputation for almost inhuman cleverness. It took Stoppard a couple of decades to live down the impression generated by Jumpers and Travesties (an amazing 1974 anti-Marxist comedy with Lenin as the heel) of having more head than heart.

Among the major writers of our time, Stoppard may take criticism more seriously than anybody else (in part because as a playwright he has actors financially dependent upon the popularity of his work; in part because the author, who is perhaps the world’s most reasonable man, can put himself in other people’s shoes so well). Thus, the prodigy’s career has proved remarkably enduring.

Interestingly, Stoppard’s views on God (he thinks He sounds more plausible than the alternatives) and mother love (a virtue, not just an instinct) don”t seem to have changed much since 1972.

As in Arcadia, where his heroine was modeled on Lord Byron’s daughter Ada Lovelace, the legendary 19th-century computer-programming theorist, Stoppard assumes that a lovely ingenue who is also a scientific prodigy is a winsome combination on stage.

I”ve suspected since Arcadia that one of Stoppard’s regrets in life is that he hasn”t had a daughter. On the other hand, he is not the kind of man to dwell on what luck he’s lacked because Stoppard, who was born TomÃ¡Å¡ StraÃ¼ssler in Czechoslovakia in 1937, is grateful for all the good luck he’s enjoyed since his widowed Jewish mother married a British Army major in a refugee camp in Asia. Upon arrival in his stepfather’s homeland after a hellish early childhood during WWII, Stoppard immediately became a patriotic English boy.

A natural loyalist, Stoppard became an enthusiast not only of his adoptive country, but of his Slavic homeland. He was one of the very few English-language literary figures to be actively concerned about Communist rule, writing at least ten original plays protesting the subjugation of Eastern Europe.

Among the things that have changed since Jumpers is that Stoppard’s tone is mellower and his stage tricks are less attention-seeking.

The ideological landscape has altered as well. In Jumpers, the left was dominant, plaguing the hapless protagonist, a traditionalist moral philosopher. In The Hard Problem, set in England in the first decade of the new century, his similarly old-fashioned heroine is beset instead by the self-confidence of her neo-Darwinian colleagues. The left is intellectually nugatory, and all the energy resides with the disciples of the late biologist William D. Hamilton, such as Richard Dawkins and Matt Ridley. Stoppard explains that the play grew out of an argument he started with Dawkins over his 1976 book The Selfish Gene.