A Question of Quackery 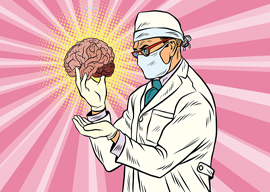 One cannot blame anyone for having failed to do the impossible, but the fact is, roughly speaking, the science (or study) of psychology has added nothing whatever to human self-understanding, at any rate over and above that which is available from literature and honest self-examination, the latter being much out of fashion since the rise of psychology, self-help books, secular gurus, etc. When psychologists say something that is true, which sometimes they do, it is either banal or else (if it is important) derivable from other sources of knowledge.

Man is doomed (or perhaps destined would be a better word) to seek a total explanation of himself, but he is equally doomed, or destined, to fail. The myth of Sisyphus is perhaps emblematic of his efforts, except that Sisyphus never claimed success in his task. Plenty of psychologists have done just that, or at least implied that success is just round the corner, give or take a research project or two.

From time to time I receive through the internet a communication from a site called BrainWise. I do not recall ever having subscribed to the site, but (as both psychology and experience amply demonstrate) memory is fallible. Normally I take no notice of it, but today I could not ignore it. The reason for this was the appearance on it of Dr. Robert Sapolsky, a neuroscientist at Stanford who is “an expert on behaviors.”

It was not his expertise on behaviors that transfixed me, however, but his beard. A man with a beard such as his must be very wise, a bit like Tolstoy or Darwin or Ruskin or the Ayatollah Khomeini or Fidel Castro. As is well known, wisdom resides in beards.

So what is the wisdom contained in or emanating from Dr. Sapolsky’s beard? According to BrainWise:

[His] research explains what happens to our bodies when they are under stress. The brain interprets any perceived stressful event as a threat, and produces glucocorticoids—hormones that trigger our fight or flight reaction. This survival response serves us well in bursts of activity, such as running from danger or rapidly pulling a finger away from a hot pot.

“Man is doomed to seek a total explanation of himself, but he is equally doomed, or destined, to fail.”

None of this is exactly news, either physiologically or from the point of view of the most elementary human experience. Torturers have known for some centuries that red-hot pincers from which their clients cannot withdraw their body parts are neither health-giving nor pleasant to experience.

A little further on we learn:

Sapolsky’s research has focused on parts of the brain related to learning, memory, and judgment under stress. It is not surprising that he found that the neurons in these areas don’t function as well. When our Lizard Brain gets triggered, we are unable to tell the difference between a real danger and one that causes us to eat a carton of ice cream, self-medicate, or worse.

This little passage is interesting in two ways. First, it suggests that Man is like an anesthetized lower animal in a physiological laboratory with electrodes implanted in its brain, impulses from which cause the animal to react in a predetermined and stereotypical way. Second, it implies, as do many articles written in Anglo-Saxon countries, that a tub of ice cream or a vast slice of chocolate cake is utterly irresistible to people under stress, though this is certainly not the case in countries with more civilized culinary traditions. It is not the Lizard Brain that is responsible, but the legacy of cultural tradition and lazy stupid mothers.

Dr. Sapolsky is not BrainWise’s only guru, however. At the other end of the spectrum of gurudom (on this occasion) is a clean-cut youngish man called Shawn Achor. He, apparently, has been doing happiness research. After n years of education and research, he has, at least if reported correctly, come to the following conclusion:

Here are activities that have been found to promote feelings of well-being and happiness:

Writing down three gratitudes every day

Doing a daily act of kindness, (e.g, saying something positive to someone by Email)

Exploring these thoughts, expressed sometimes in proto-Maoist language, is like diving into an empty swimming pool: It is likely to damage the mind. And do we really live in a world in which sending a complimentary email to someone in order that we should feel happy counts as an act of kindness? Shall we be twice as happy if we send two such emails?

For all our supposed sophistication, we do not seem entirely to have emerged from the age of quackery (and perhaps we never shall). The newsletter from the site continues:

The BrainWise CPR Problem Solving Worksheets are additional sources on activities that help rewire the brain. I love the unsolicited testimonial I received from a teacher who marveled at the difference she saw after students used the worksheets: “I have handed out over 150 BrainWise sheets in the last month and out of all those every issue was resolved.”